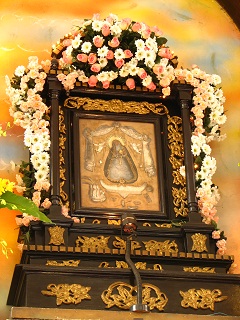 The image of Nuestra Señora del Santissimo Rosario in Santo Domingo Church, Quezon City, Philippines traces its origins way back in 1593 when, on the death of his father, Spanish Governor-General Luis Perez Dasmariñas commissioned to have a Marian statue sculpted. He wished to give a religious imprint to his regime in the Philippines. A non-catholic Chinese sculptor was found to make the statue. This sculptor later became a convert to Catholicism.

The beautiful image was presented to the Manila Dominicans and enshrined in the old Santo Domingo Church by the Pasig river. It is this same image that was visited barefoot by General Ugalde and his men in thanksgiving for their victory in La Naval. It is this same image which was venerated by our first Filipino saint, Lorenzo Ruiz, who was martyred in 1637.

The image is about 4 feet 8 inches tall and is made of hard-wood, with ivory face and hands. The Oriental-Filipina face is almond-shaped, with high-set cheekbones and slanting eyes. Historians explain that during the Spanish Era, it was the tradition of rich and devout Filipino families, particularly those of Spanish lineage, to consider the Santo Rosario as another "heiress" to the family jewels. An entire lot was usually apportioned and donated to the Virgin, hence the numerous jewels that adorn the image.

On October 5, 1907, the image of La Naval was crowned canonically by Rome's Apostolic Legate, by order of Pope Pius X. The coronation was a major event. A huge throng of people attended. Among the dignitaries who graced the event were Governor-General James Smith (U.S. governor of the Philippines), Chief Justice Arellano of the Supreme Court, and Manila Mayor Don Felix Roxas.

This mayor of Manila recounted that "an incessant and persistent rain fell at the precise moment when the image of the Virgin passed near the small altar where the Papal delegate, Monsignor Guidi, assisted by Monsignor Petrelli as secretary, was preparing to place the crowns on the infant Jesus and on the Virgin." Further, he said, "From this moment [of coronation] almost all of those who took part and witnessed those rites firmly believed they had crowned the Virgin of the Rosary as the patroness of the Philippines.''

Thus in 1954, in a boat-shaped carriage, the Virgin of La Naval was led in solemn procession by the Philippine hierarchy, public officials, priests, nuns, and thousands of devotees, to her new home. This shrine was declared by the Philippine bishops as the national shrine of the Queen of the Holy Rosary of the Philippines.

The beautiful image of Nuestra Señora del Santissimo Rosario is dressed as a royal lady of the palace of King Philip of Spain. On her left arm, she holds the Child Jesus. With her right arm, she holds a royal scepter, staff, and a rosary. The statue is bedecked with jewels, tributes from her throngs of devotees through the ages. The halo is surrounded by 24 stars and she wears an elaborate crown. The crowns of Our Lady and the Child Jesus are of high-karat gold and studded with many precious jewels, gifts by affluent devotees.

While the feast of Our Lady of the Rosary is celebrated by the universal Church on October 7, the feast of the "Virgin of La Naval" is celebrated in Santo Domingo Church every second Sunday of October. On this day, the image is borne on an elaborately-decorated carriage in the form of a ship, and is brought around the main streets of Santo Domingo Parish in a festive procession amid a throng of devotees. She is then finally brought back to the main altar of the Santo Domingo Church. For pilgrims who visit on ordinary days, the statue is enclosed in glass at the side altar.