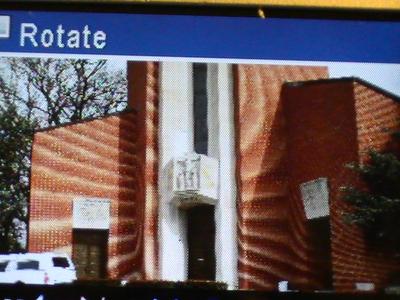 I attended the funeral Mass of June Auth. She was a mother of 13 children and a convert to the Catholic Church. She was 94 when she passed away and especially in her last year I heard her say joyfully with tear in her eyes that she knew without a doubt that the Catholic Church is the true church Jesus established. She is such an inspiration in her faith and I believe this photograph is a sign that God is rewarding her faith and answering her prayers because there were many relatives at the Mass who were not Catholic. I am trying to share this with as many people as possible. The picture is of the outside of the church and the camera picked up what human eyes could not see. It is reminiscent of the resurrection.