There will always be interest in those wonderful celestial beings created by God in the very beginning, the Angelic host.

In a previous article I wrote on the entire nine Choirs of Angels, the irony of the result of that great test to which they were subjected was highlighted. Lucifer, the brightest and highest of all the Angels, became enamored with his beauty and failed to properly credit this to the Creator. But this was just a minor crack, and when he and those who chose to follow him failed their ultimate test in a willful act of disobedience (Non Serviam), war broke out among the heavenly host.

From the lowest Hierarchy, from the ranks of the Archangels, rang forth the cry against those who chose to disobey: “Who is like unto God?” This challenge by the Archangel Michael and fully two-thirds of the Angelic host resulted in Lucifer transforming into Satan and the rest of his followers into demons, cast out from the pre-heavenly state they were in. They were denied for all eternity the beauty and wonders of the Beatific Vision to which the good angels were admitted.

Archangel Raphael: One of the Seven who Stand before God 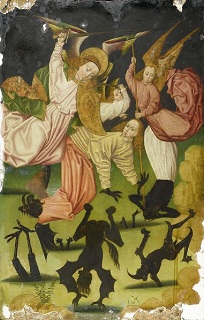 Only three of the mighty seven who stand before God (Tobit 12:15) have their names officially conveyed to us: St. Michael, the Prince and leader of the heavenly host; St. Gabriel, the Strength of God and chosen messenger for very special occasions like the Annunciation; and St. Raphael, Healer of God. The names of the other four are mentioned in the Book of Enoch and other sources, but disparities on the actual names prevent us from mentioning them.

What is important to note is that the Seven Angels who stand before God are most likely all Archangels, from the second-to-the-lowest Choir, placed above even the mighty Seraphim in the Order of Grace because of their early and positive response to the challenge of the demons. On the other hand, other biblical accounts note that a lot of the demons come from the ranks of the Principalities and Powers, higher up the ladder than the Archangels.

The account given to us in the Book of Tobit has to be the best possible insight into the role Angels play when they interact with Man, the best example of Angelophany in existence. There are so many lessons to be learned from the interaction between St. Raphael, and Tobit and his son Tobias.

The list of people, professions, and situations that lay claim to St. Raphael as their Patron is quite long – and interesting. To wit: medicine and healing of bodily ills; eye disease and the blind; apothecaries, druggists, and pharmacists; doctors and nurses; insanity and mental illness; nightmares; fishermen; travelers; business meetings; love, lovers, and courtship; marriage; shepherds and shepherdesses; young people. In addition, we must add good counsel (for the wonderful advice he kept giving Tobias); exorcism (for driving Satan himself – in the guise of Asmodeus – away from Sarah); and pets (they had this nice faithful dog with them throughout the journey).

This story is set in the period of Exile of the Northern Kingdom Jews, in Nineveh itself. Tobit has an only son he dotes on (Tobias) and – given his newly-acquired blindness after doing so many good deeds – is fearful of losing him to an accident or some other malady. (We must remember that Tobit was already praying at that point for death to overcome him, distraught as he was about going blind.)

Tobit remembered that he had a distant relative, Gabelus, living in the land of the Medes, who still owed him some money so he had no choice but to send Tobias to collect. Fearful for his son’s safety, he then seeks out a suitable companion to help guide his son. Unknown to him, Heaven had already set in motion a plan to reward Tobit for all his good works and his faithfulness. Heaven had also already made plans for a certain Sarah and her family, but more on them later… (Of this latter situation, Tobit has no awareness whatsoever, since God’s ways are perfectly inscrutable.)

When Tobias went forth to look for such a man, he found a handsome young fellow dressed as if to undertake a journey. Tobias did not know he was before an angel of God and asked him who he was. St Raphael, taking on the guise of a distant relative of theirs from a great family answered, “Of the children of Israel” (Tob 5: 5-6).

Some critics use this taking on of a disguise as a form of deception on the part of the angel. However, we must understand that the good angels are fixed in their goodness and are totally incapable of sin or the slightest deception. So, for the purpose of this exercise, St Raphael takes on the persona of Azariah, the son of the great Ananias, mostly to assure the old man that his son is in safe hands. In fact, not knowing about the true nature of his son’s traveling companion, he consoles his weeping wife with the prophetic words, “Weep not; our son will arrive thither safe, and will return safe to us, and thy eyes shall see him. For I believe that the good angel of God doth accompany him, and doth order all things well that are done about him so that he shall return to us with joy.” (Tob 5: 26-27)

The Adventures of Tobias and Azariah (St. Raphael) 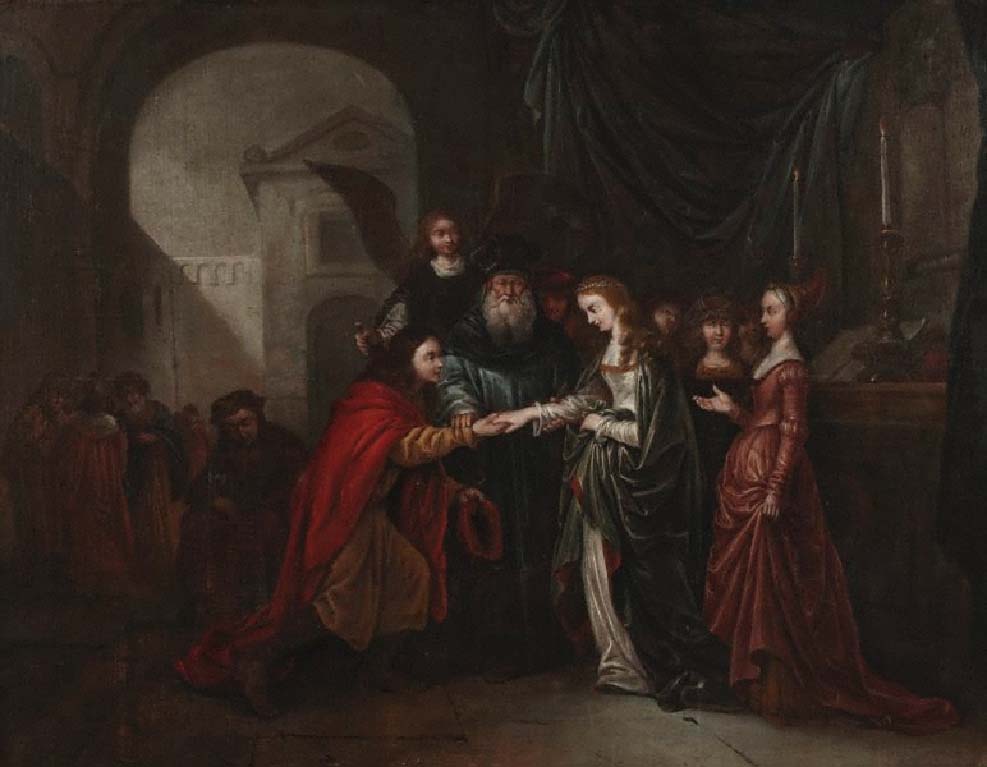 In the first adventure of the journey, Tobias is almost devoured by a huge fish but receives immediate and useful advice from Azariah on how to snare it. Then, Azariah informs him to keep the heart, the gall, and liver of the fish and preserve these for some future use as medicines, explaining the different cures possible from these fish parts.

When they need a place to stay, Azariah suggests they stay with Raguel, a close relative of Tobit. Raguel has a daughter, Sarah, whose sad bridal story has reached as far as Nineveh – after all, not every bride manages to lose seven brand new husbands on their wedding night. Even worse, Azariah proposes that Tobias court and marry the unfortunate Sarah – and poor Tobias remarks: “Brother Azariah, I have heard that this woman has already been married seven times, and that her husbands died in their bridal chambers. On the very night they approached her, they dropped dead. And I have heard it said that it was a demon who killed them.” (Tob 6: 14)

Azariah allays Tobias’ fears and lays out the plan, using the liver and heart of the fish to drive away the demon. But more important is the advice he gives Tobias, which is instructive for all newlyweds. He tells them to pray and give thanks to God, and to approach his new wife with heavenly intentions. This is important when we note that many who enter into marriage do so while in the state of sin and with only lust in their minds. The fate of the seven ill-fated bridegrooms should remain in our minds when we teach the young about the sanctity of marriage and the marriage act.

When Tobias does get to meet Raguel, he asks for Sarah’s hand in marriage. Raguel agrees but also hedges by digging a grave just in case. Imagine the happiness of the couple and the parents of Sarah when the newlyweds survive the night, after spending a lot of the time in prayer. Meanwhile, to show the supremacy of the good angels over the demons, St. Raphael easily dislodges Asmodeus and binds him in the desert of Egypt. The prayer of the two lovers in Tob 8: 5-7 is a classic and should guide all lovers and newlyweds on how to pray to God for a good marriage.

Azariah then goes to Gabelus to collect the funds due and they all return to celebrate the marriage of the two happy young people.

The unexpected detour and the wedding feast, which probably lasted at least a week if Jewish custom was to be followed, caused a lot of anxiety back home. The blind Tobit and his wife must have been extremely distraught, imagining all sorts of mishaps that their son and his companion must have encountered. Imagine their joy when both returned safe and sound. Furthermore, Tobias, following the instructions of Azariah, smeared the paste from the fish gall on his father’s eyes, restoring the old man’s sight.

The final and very important encounter between father and son, and Azariah is both touching and revealing. When father and son typically offer half of the monies brought back in a generous gesture, the identity of the good traveling companion is slowly revealed. This process of preparing Tobit and Tobias with respect to the true identity of Azariah was necessary. First, St. Raphael told them to always praise and give thanks to God, and proclaim His greatness. He also extols the virtue of almsgiving done with right intentions, and implies how pleasing this is to God. Then, lifting the veil ever so slightly, he reveals that when Tobit and Sarah prayed, he was the one who conveyed their pleas and their good deeds to the Almighty. By this time, Tobit and Tobias must have begun to suspect something different about Azariah, who then revealed his true persona: “…I am Raphael, one of the seven angels who enter and serve before the glory of the Lord”. (Tob 12: 15)

To those who think that good works count for nothing, read the Book of Tobit and reflect upon it. It is very clear that good works done well, not for one’s own benefit, and offered up to God uncomplainingly, count for more than a lot of other showy but empty offerings. This is putting Faith into Action. A good follow-up reading would be the whole of Matthew 25 to see how Christ will judge everyone in the end.

Click here to return from Archangel Raphael to Catholic Spirituality.