Preposterous? Impossible? Or at least, a wild dream which may just prove attainable… Who knows?

The reactions of Filipinos to the idea of this world-renowned tourist destination as a Marian pilgrimage site may be one of the above three responses. Boracay is so much known as the island in the Philippines with a 3.5 kilometer-long white sand beach where Filipinos (and foreigners alike) trek to swim, indulge in water sports, go on long hikes, sunbathe, and have many rounds of drinks by the beach till the wee hours of the morning. It is not in people’s minds as a place of prayer and spiritual nourishment.

But first of all, let me expound a little on Boracay.

Boracay is a small island (around 1,000 hectares, population of 18,229) which is one hour by plane from Manila to Caticlan and a short 20-minute ferry ride away. Way back in the 1980s, it was not yet a tourist destination, although a few had already known of the pristine island. In the mid-1980s, while vacationing in my hometown which is four hours away by land, we had this impulse to see this so-called Boracay. I must say that it was then really pristine, virginal, with a beauty which makes one ask the Creator, “Why this, so hidden and far away?” There was very little electricity then and at night, one moved by the light of the moon and the stars. At that time, the white sand beach and the clear blue waters were purest and untrammeled.

But Boracay was “discovered” and thus, came the many resorts. Depending on your pocket, you can always find a resort for your needs. There are very cheap ones, moderately expensive ones and a few which cater to the very rich who seek privacy. Boracay now is a dream destination of many Filipinos. 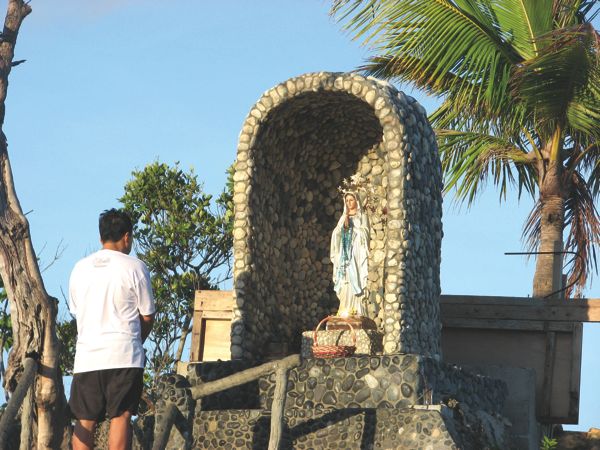 Months ago, Boracay was in the news for an unthinkable reason. The statue of Our Lady of Lourdes in the grotto located in the waters was smashed and desecrated!

Reading the news, I was aghast. I had seen that grotto. It was in Station 1, in front of Willy’s Resort. Way back in the year 2001, on our second trip to Boracay, I was so surprised to see a grotto of Our Lady of Lourdes in the waters! Enjoying the cool waters and the soft powdery sand, I did something unconventional – I said some Hail Marys right there and then, facing Our Lady.

Reading the news, I felt I had to go to Boracay! It would be summer soon and that would be a nice “working vacation”.

Fr. Magloire Placer, the parish priest of the Holy Rosary Church in Boracay, was most accommodating. As he narrated the story to me, he was oftentimes misty-eyed.

During the Simbanggabi (dawn mass) last year, I had already heard that this woman who had put up the statue way back in the ‘80s would replace the Virgin Mary with the Ten Commandments. She was a Catholic then but had become a born-again Christian. I even preached during one of the Simbanggabi Masses that such a thing should not be done.

But on 4 February 2010, just past midnight, under the cover of darkness, the statue was smashed and it was reportedly burned and buried. Even the rock cave housing the statue was destroyed. I learned of this vicious act right away and called a meeting of the Parish Council, barangay officials and some socio-civic leaders on that same morning. What amazed me was that after our meeting, people flocked to the church. They considered Mary to be the patroness of the island and were in fear as to what would happen with the desecration of the statue. People, even some Protestants, were angry and sad. But I assured everyone, “Surely, from this tragic experience, something good will come out.”

Right there and then, we decided that we should install another statue on February 11, the feast of Our Lady of Lourdes. That would be only seven days away! We had to move fast.

Who was the lucky donor of the Virgin’s statue? Fr. Placer says that many vied for that honor but he thought the donor should be a resident of Boracay. A family in Boracay therefore ordered the statue from Manila. Fr. Placer talks in glowing terms of the installation.

At 4 p.m. of 11 February, the feast day of Our Lady of Lourdes, five of us priests celebrated a special mass in the parish church. After the mass, we proceeded to the beach and installed Our Lady of Lourdes with an enthronement ceremony. I was surprised to see a long line of people at the beach. Some came all the way from Kalibo (an hour and a half away). We had a fluvial procession. We even had fireworks, courtesy of the Department of Tourism. There was such great rejoicing!

As Fr. Placer had earnestly wished, indeed something good came from the sad experience. He said that the destruction of the statue roused the Marian fervor of the people of Boracay and awakened the dormant ones. An offshoot of the incident is that now they pray the Rosary at the grotto every Saturday 6 a.m., before the 6:30 a.m. Mass.

How Wholesome and "Clean" is Boracay?

I asked Fr. Placer this question knowing only too well that many entertainment and leisure spots are beset by evils like prostitution, drug addiction, and alcoholism. On a scale of 1 to 10, with 10 as the highest, I asked him how he would rate the spirituality of this resort island. He answered, “Seven to eight”.

Well, for matters like drug addiction, the police are on top of things. As for me, I am working – and fighting - for a stronger presence of the church in the beach area. For example, these past years I have been focusing on the observance of a “noise-free Good Friday”. Previous to 2008, there already was a local government ordinance of a “noise-free Good Friday” meaning no glaring band music, no partying, no events or shows on this very holy day. But the ordinance was never implemented. In 2008, we actively pushed this ordinance and were successful, but only partially. There was relative silence on Good Friday but at 1 a.m. of Black Saturday, the partying resumed! Thus in 2009, we again brought this up and the period of silence and mourning for the Lord was observed from 6 a.m. of Good Friday till 6 a.m. of Black Saturday. For two years now, this has been followed.

Our recent Good Friday procession was participated in by more people. We had Stations of the Cross from the barangay chapel all the way to the beach. With us praying and meditating on the Lord’s passion along the white sand beach, many local and foreign tourists were, I guess, reminded that it was Good Friday, a time to recall the Lord’s death. My reflection on the Eleventh Station, Mary and John at the Foot of the Cross, was on the desecration of the statue in the grotto and I could not help but shed tears. Some cried with me.

For Catholics, the Mass is the highest form of prayer. How is attendance of Sunday Masses in Boracay?

We have six Sunday Masses, which includes those in the barangay chapels. Previously we had only two Sunday Masses in the parish church (Our Lady of the Rosary Parish Church) but we added another one. All the Masses in the main church are fully packed.

Fr. Placer also mentioned the simplicity and innate goodness of the vendors plying the beach who say, “Father, indi man kami pala-simba pero naga-agi kami sa grotto para mangadi.” (“Father, we are not frequent mass-goers but we pass by the grotto to pray.”) These same simple people told him that when the grotto was destroyed, their sale of rosaries went down but when the Virgin was re-installed, sales perked up again.

And what happened to the woman who led in vandalizing the grotto? Fr. Placer says that even her family was angry with her and her own brother apologized for her behavior.

I told Fr. Placer, “Yours is such a unique parish. You have a world-famous beach resort within walking distance from the church. Surely, this poses different challenges for you.”

Fr. Placer is undaunted. While the powdery white sand beach is surely a great blessing, having a grotto in the waters is doubly unique and remarkable! Boracay must be the only resort in the world with Our Lady of Lourdes floating in a rock formation in the waters. Fr. Placer says the Virgin Mary in the waters is the most photographed icon in the island. (Not a bikini-clad model, Father?) And one going to Boracay would surely agree. It is difficult to take photos of the Virgin since there are usually people going up and down the narrow rocky path. Of course, for many Filipinos, it is a “Kodak Opportunity” but a few really do pray.

As I ended the conversation with Fr. Placer, there was much enthusiasm for the fate of this unique grotto in the waters. Fr. Placer says he is just waiting for a copy of the letter from the proper authorities entrusting the ownership and care of the grotto to the community church. Then, he says with a gleam in his eyes, they can go forward with plans to improve it.

On our last day in Boracay, I noted the steady stream of people going up and down the grotto. Idly sitting in front of the beach, two nuns with some decently-attired lady companions, passed by, taking a leisurely walk. At night, we thought of praying our usual family rosary in front of the grotto. The beach resort was all ablaze with pretty glaring lights, all competing for attention. But the grotto itself was in darkness.

Somehow, I did not feel sad about it. I felt a tinge of wonder and excitement. What a mother Mary is – reaching out to all her children, even the marginal Catholics who seek only the pleasures of the world. Boracay as a Marian pilgrimage site? Or at least Boracay as the only Marian resort in the world? Why not? If people like Fr. Placer truly cared and realized that Mary, Star of the Sea, brings great blessings – temporal and spiritual – they would join hands and labor together. Fr. Placer wistfully remarked that maybe the character of the people flocking to Boracay would acquire a different hue – added to the plain pleasure-seekers would be many who yearn for a little respite, and a brief interlude with sea and sand. Like the two nuns who passed in front of me that morning.

I would love to go back to Boracay – it will be my fourth. I would be looking forward not only to feasting my eyes on a picture-perfect view of white glimmering sands and clear blue waters; I would also look forward to gazing at Mary, Star of the Sea.

The battle between the Woman Clothed with the Sun and the Red Dragon has certainly been felt very keenly with the destruction of the statue. But the Woman’s gallant defenders have all come to the rescue. May Mary, Star of the Sea, continue to bless and care for her children in charming Boracay Island.