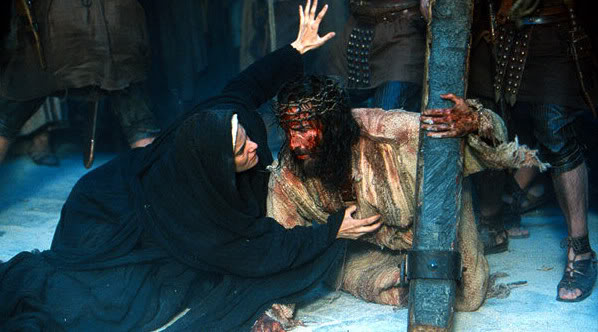 It was, for many, the most powerful scene, the most touching moment in Mel Gibson's blockbuster hit "The Passion of the Christ"...The brutalized Jesus was falling again under the weight of the cross. His mother runs towards Him, and as she approaches the fallen Jesus, she recalls Jesus as a child, falling in the dirt road outside their home. She runs to the falling child frantically, reaching out to protect Him from the fall. And in that moment, she says to the child Jesus, "I AM HERE."

I am here. With Jesus. What a masterful stroke of Divine Providence, indeed, that at this time of great debate over the possibility of the dogmatic declaration of Mary as Co-redemptrix, Mediatrix and Advocate, the full meaning of Co-redemptrix is captured in the words "I am here", in one of the most powerful moments of a film seen by millions of people worldwide. The Holy Spirit, it seems, is preparing the hearts of people to accept the dogma, and even Mel Gibson's movie is playing a part in God's plan to make known the truth of Mary's role as Coredemptrix.

For in essence, the real meaning of Co-redemptrix is "with Jesus”. I AM HERE , Mary says to Jesus.And indeed, Mary was very much "with Jesus'' all throughout His life, from her "Yes" in the Annunciation, to her "spiritual crucifixion" in Calvary.

The past few years has seen 550 bishops, 43 cardinals and nearly 7 million ordinary faithful from 157 countries in six continents of the world sign petitions urging the Holy Father to proclaim, as the Fifth Marian dogma, Mary as "Co-redemptrix, Mediatrix and Advocate".

The 7 million petitions were generated in a span of ten years the highest rate of annual petitions submitted to the Holy Father in the history of Marian dogmatic declarations. Pope Pius XII declared the dogma of the Assumption in 1950 upon receiving 8 million petitions urging its declaration gathered over a period of 95 years.

The petition campaign is spearheaded by Dr. Mark Miravalle, a lay professor of Theology at the Franciscan University of Steubenville. Dr. Miravalle is president of the Vox Populi Mariae Mediatrici movement - an international Catholic movement spearheading the campaign to petition the Holy Father to declare Mary as Co-redemptrix, Mediatrix  and Advocate.

Worth noting is the fact that according to Professor Miravalle, two countries are foremost in national support in petitioning the Holy Father to declare the fifth dogma: Mexico and the Philippines.

And yet, despite the scale and speed of the dogma's acceptance among the ordinary faithful, many theologians, clergy and faithful are still questioning the truth of the dogma, or the appropriateness of declaring it at this time. In particular, many are questioning the supposedly "controversial" title of Coredemptrix.

The word redemptrix, on the other hand, comes from the Latin verb "redimere" which means "to buy back'' and "trix", which denotes femininity. Co-redemptrix, therefore, literally means "the woman who buys back with", or more accurately, "the woman with the Redeemer.”

Not too many people know that on June 1, 2001, Philippine Church leaders including Cardinal Sin and Cardinal Vidal, politicians, lay faithful, and other dignitaries such as former President Cory Aquino, gathered in the Manila Cathedral to honor the Virgin Mary under the title of Lady of All Nations.

It will be recalled that in a series of apparitions in the Netherlands (approved by the local Bishop), Our Lady under the title "Our Lady of All Nations" called on the Church to proclaim the dogma of Mary as Co-redemptrix, Mediatrix and Advocate. Cardinal Vidal, on that occasion, explained clearly the meaning of Co-redemptrix:

Mother Teresa of Calcutta explains Coredemptrix in clear, simple terms: "Mary is our Coredemptrix with Jesus. She gave Jesus His body and suffered with Him at the foot of the cross."

The title Co-redemptrix, therefore, does not elevate Mary to a level of equality with Jesus but rather refers to her subordinate and secondary cooperation in Jesus' saving work.

Co-redemptrix in the Early Church

What many people do not realize is that all throughout Church history, Mary's role as "co-redeemer" with Christ as Co-redemptrix has been repeatedly taught by numerous saints, doctors of the Church, theologians, bishops and popes. . . as early as the second century, in fact! The doctrine of Mary as collaborator in the redemptive mission of Christ is not anything new. The present movement spearheaded by Miravalle is merely the climax, the last leg in the race to the finish line started as early as the second century.

We know that He, before all creatures, proceeded from the Father by His power and will, ... and by means of the Virgin became man, in order that the disobedience which began from the serpent might have its undoing in the same way in which it arose.

As early as the third century, St. lrenaeus (c. 202), Bishop of Lyons, spoke of Mary's role in salvation: "...Mary, being obedient, became the cause of salvation for herself and for the entire human race..."

In the fourth century, St. Epiphanius, Bishop of Salamis (403), likewise explained the salvific role of Mary:

Since Eve brought the cause of death to the human race, through which death entered the world, Mary furnished the Cause of life, through Whom life was produced for us.

St. Ambrose, doctor and spiritual father of St.Augustine, taught that the Virgin Mother of Christ "brought forth redemption for the human race":

Let us not be astonished that the Lord, who came to save the world, began His work in Mary, so that she, by whom the salvation of all was being readied, would be the first to receive from her own Child its fruits.

The great St. Augustine was identified by Pope John Paul II as the first to refer to the Blessed Virgin as "co-operatrix" of redemption, a term synonymous with Coredemptrix. Augustine wrote:

Numerous other great saints and doctors of the early Church unequivocally professed Mary's role as Coredemptrix, among whom include St. lrenaeus, St. Jerome (420), St. Peter Chrysologus (450), and St. John Chrysostom.

Co-redemptrix at the Turn of the Millennium

It was, however, a Byzantine monk at the end of the tenth century by the name of John Geometer, who made the theological breakthrough of shedding light on the inseparability of the Mother and the Son in the accomplishment of redemption fulfilled at Calvary. John wrote in his book "The Life of Mary":

The Virgin after giving birth to her Son, was never separated from Him in His activity, His dispositions, His will... When He suffered, not only was she everywhere present beside Him and even realized especially then His presence, but she even suffered with Him...

This theme of the inseparability of the Mother and the Son in the work of redemption will be repeated many times over in the next centuries, in particular, in the Church-approved revelations of Our Lord and the Blessed Mother to St. Bridget in the fourteenth century.

St. Anselm (1109), one of the greatest theologians and philosophers of the Middle Ages, exclaimed: "Through thee we have access to the Son Who redeemed the world through thee."

St. Bernard of Clairvaux (1153), arguably the most significant figure of the twelfth century, frequently referred to Mary as "redemption's starting point." He wrote:

O hallowed Virgin, offer thy Son ... offer for our reconciliation this Victim, holy and pleasing to God. With joy, God the Father will receive this oblation, this Victim of infinite value.

Arnold of Chartres (1160), St. Bernard's disciple, was the first to state that Mary was "co-crucified" with her Son at Calvary, and that the Mother "co-dies" with Him:

What they did in the flesh of Christ with nail and lance, this is a co-suffering in her soul. Mary co-died with the pain of a parent.

Mystical Revelations of the 14th Century

The doctrine of Co-redemptrix gained further ground in the fourteenth century through the mystical contributions of St. Bridget of Sweden (1373), and St. Catherine of Sienna (1380). The Revelations, the written record of a series of visions and prophecies granted to St. Bridget by Jesus and Mary, were not only approved by the Pope and the Church, but were in fact highly regarded by a large number of popes, bishops and theologians. In the Revelations, Jesus clearly says:

My Mother and I saved man as with one Heart only, I by suffering in My Heart and My Flesh, she by the sorrow and love of her Heart.

Mary affirms this, saying: "My Son and I redeemed the world with one heart."

St. Catherine of Siena, the "mystic of mystics", great Church Doctor and Co-patroness of Europe, called the Blessed Mother the "Redemptrix of the human race":

O Mary... Redemptrix of the human race because, by providing your flesh in the Word, you redeemed the world. Christ redeemed with His passion and you with your sorrow of body and mind.

Among all the popes of the twentieth century, it was Pope John Paul II who taught Mary as Co-redemptrix most frequently and most comprehensively. Pope John Paul II  referred to Mary as Co-redemptrix at least six times during his entire pontificate. These references are made through various teaching forms, which together constitute the “ordinary magisterium" of the Church - apostolic letters, addresses, encyclicals.

Although Vatican Council II did not explicitly mention Co-redemptrix, the John Paul II still forcefully argued that it nonetheless taught the truth of the doctrine of Marian Co-redemption. In a General Audience on April 2, 1997, as. part of his seventy catechetical teachings on the Blessed Virgin, the Pope quoted from "Lumen Gentium", which contains the Council's teaching on Marian Co-redemption:

... the Mother endured "with her only-begotten Son the intensity of His suffering, associated herself with His sacrifice in her mother's heart, and lovingly consented to the immolation of this victim which was born of her." With these words, the Council reminds us of "Mary's compassion”; in her heart reverberates all that Jesus suffers in body and soul, emphasizing her willingness to share in her Son 's redeeming sacrifice and to join her own maternal suffering to His priestly offering. ...Lumen Gentium relates the Blessed Virgin to Christ, who has the lead role in Redemption, making it clear that in associating herself "with His sacrifice” she remains subordinate to her divine Son.

The great saints, Church Fathers, theologians, and several popes, have spoken. "Mary Co-redemptrix" is a clarion call that reverberates throughout hundreds of years of Church history, from as early as the second century, to the present Vicar of Christ. As we read on the story of Mary Co-redemptrix, Mediatrix and Advocate in the next few pages, let us keep in mind the words of Edouard Cardinal Gagnon, P.S.S., President Emeritus of the Pontifical Council for the Family and the Pontifical Committee for International Eucharistic Congresses:

In truth, how can any faithful Catholic question the appropriateness of the Coredemptrix title as applied to our Blessed Mother when it has been pronounced by a litany of popes, saints, blessed, mystics, doctors of the Church, and conciliar theologians throughout the history of the Church, including Pope John Paul II...?

Click here to return from Mary Coredemptrix to Understanding Mary.