The Franciscan Crown for Our Lady

and other Franciscan "Jewels"

The religious order founded by St. Francis of Assisi – the Franciscan order – is a rich spiritual order whose legacies to the Church are immensely enriching and priceless. To me, they are precious “jewels”. It is edifying to read about them, especially in the Messenger of St. Anthony.

One of these jewels is a kind of open-air tableau celebrating the birth of Jesus. It is written that St. Francis and his friars gathered ordinary farm animals, real children, and shepherds to re-enact Jesus’ birth in the town of Greccio, Italy on December 24, 1223. The idea of St. Francis was to put up a visual aid for the people to understand the mystery of the Incarnation and know and experience what they lived everyday: cold in winter, rejection in poverty, joy in human life and companionship. From here, the tradition grew. Miniature stables we now call “belen” have become a fixture at Christmas time in churches, homes, buildings, and parks.

Biographers of St. Francis of Assisi, St. Bonaventure and Thomas of Celano, wrote that the setting up of St. Francis of the first nativity crib was with the Pope’s approval. The hay that had been placed in the manger, according to their account, was preserved and subsequently became a means through which a number of miraculous healings of animals and people took place.

Another legacy of the order is called the Franciscan Crown for Our Lady. We are familiar with the traditional Rosary (the one given by the Blessed Mother to St. Dominic), originally with the Joyful, Sorrowful and Glorious mysteries; the Luminous Mysteries were added by John Paul II. Not many people though are familiar with the seven-decade rosary called the Franciscan Crown, also known as the Seraphic Rosary.

Somebody gifted me with this spiritual treasure almost twenty years ago. The Franciscan Crown is brown in color, the color of the order’s habit. According to George Ferguson of the Messenger of St. Anthony, the Seraphic Rosary dates back to the fifteenth century and its beginnings were documented by a seventeenth century Franciscan historian by the name of Friar Luke Wadding (1588-1687).

Origin of the Franciscan Crown 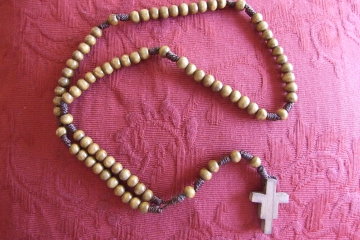 There was a young man by the name of James who was a fervent devotee of the Blessed Virgin Mary. Everyday, he would visit the local Church and lay a wreath of flowers on Our Lady’s altar. Eventually he sought entry into the Franciscan order at Assisi but early on in his novitiate, he found that he could no longer continue his daily practice of presenting flowers to the Blessed Virgin. It saddened him so much that he made up his mind to leave the order.

Kneeling at Mary’s altar, he opened his heart to his heavenly Mother and told her his plan. Lo and behold! Our Lady materialized before him and said: “Remain here and do not grieve because you can no longer weave a crown of beautiful flowers for me. I will teach you how you can daily weave a crown of roses that will not wither and will be more pleasing to me and more meritorious for yourself.”

The Blessed Mother then taught him to pray the seven-decade rosary with two additional Hail Mary’s in honor of the 72 years she lived upon this earth.

"Recite one Our Father and ten Hail Mary’s while recalling the joys I experienced. If you recite these prayers as I have directed, rest assured, my dear son, you will weave a most beautiful and acceptable crown and merit for yourself innumerable graces.”

George Ferguson writes further that the young friar James began at once to recite the prayers as instructed. It so happened that the novice master entered the Church and saw in amazement how an angel wove a wreath of roses as the young friar prayed. After every 10th rose, the seraph inserted a golden lily. When the wreath was complete, the angel placed it upon the head of the young novice.

In holy obedience, the young friar narrated to the novice master what had transpired. As a result, the custom of reciting the joys of Our Lady became widespread.

These are the seven episodes of joy in Our Lady’s life which make up the mysteries of the Franciscan Crown:

When I was given this Franciscan Rosary I did not know anything about its background. So when God in His omnipotence gave me the opportunity to read such a beautiful account of its beginnings through a magazine my sister sent me from Canada, I decided to share it with you, dear readers, with much joy and a genuine hope that you will have a greater devotion to our Blessed Mother.

Click here to return from Franciscan Crown to Catholic Spirituality.