THE HOLY SACRIFICE OF THE MASS - AND WE, THE PEOPLE OF GOD 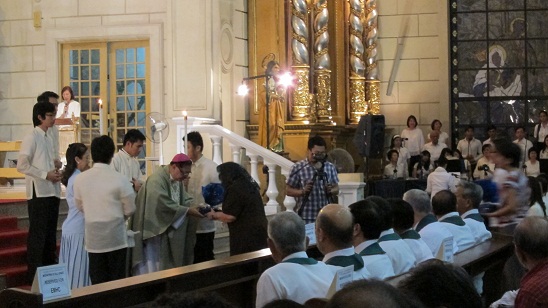 The Holy Sacrifice of the Mass is the most perfect act of Adoration that the People of God can get involved in. First, the true Minister during Holy Mass is none other than Jesus Christ Himself. Second, the Victim being offered up in oblation, through the Holy Spirit, to the Father is also Christ Himself who reprises the sacrifice in Calvary each time Mass is celebrated. Since God sees everything in an eternal present, He sees the ultimate holocaust where His beloved Son offers up His Body, Blood, Soul, and Divinity both as offering and reparation for the transgressions of Man. The ultimate end of each and every single Mass is the appeasement and adoration of the Father, Who must be pleased by this supreme act of Love by His Son.

The People of God are invited to gather together at least once a week on the day appointed, to spend time adoring and conversing with God at the Holy Sacrifice of the Mass. It is an opportunity for every one to unite with the other members of the Mystical Body of Christ in an occasion that is both formal and intimate. During the mass, we recall the life of Jesus and the lessons He imparted which serve as guideposts for us in order to be united with the Godhead in the Eternal Banquet in Heaven. For that is what the Mass also is, a Eucharistic Banquet that provides a foretaste of what awaits us in the life hereafter.

Since we are called to participate actively and consciously at the Holy Sacrifice of the Mass, the People of God must learn to leave behind the cares of each day and, instead, learn to offer these up together with other concerns. In fact, what we must understand is that we are sinful and imperfect creatures who are asked to approach the altar and offer oblation to the Perfect God. But what makes our own concerns and offerings worthy of God’s attention would be to unite with the Sacrifice of the Mass; yes, even with masses being celebrated throughout the world. We ask the Blessed Mother Mary to take our otherwise imperfect offerings and embellish them in a way that only she can, as the dispenser of Grace by way of the Holy Spirit her Spouse, and offer these to her Son and the Father.

A holy person was privileged to see a procession of Angels approach the altar during the Offertory of the Mass. The first set of angels was radiant and happy, and carried golden bowls that seemed to be overflowing with shining items. The second set of angels approached the altar with nothing in their hands. The third set of angels walked with eyes downcast and appeared to be very sad. The Blessed Mother explained what the visionary saw. The first set of angels were carrying offerings made by people present in the mass who actually presented their intentions and united them with the Lord’s Sacrifice, and who were also mentally present during the entire mass. The next group of angels represented people present at mass but who failed to offer intentions. The last group of angels belonged to those who felt forced to attend, who were thinking of other things, and who basically wished for mass to end so they could pursue other endeavors.

Click here to return from Holy Sacrifice of the Mass to Catholic Beliefs.