The Infant Jesus of Prague 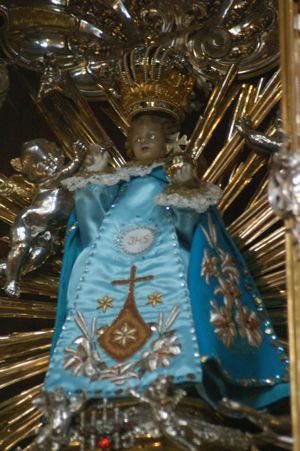 Set in the charming and lovely city of Prague in the heart of Europe, the story of the miraculous icon of the Infant Jesus of Prague which resides in Mala Strana (The Little Quarter) is equally enchanting, interwoven as it is with legends and facts.

It is a fact that the little wax statue, 47 cm. high, came from Spain. Legend has it that the statue was modeled after a vision of the Infant Jesus by a monk named Joseph. Fr. Adolf Faroni, SDB, in his book, “The Santo Niño of Prague,” writes that upon Joseph’s death, the monks displayed the statue in the church where it bestowed favors.

Spain flourished – it was freed from the Moors and the government was restored to a Catholic king. Monasteries sprung up and one of the great figures of the time was St. Theresa of Avila who had a deep devotion to the Holy Infant. She would bring an identical copy of the statue of the Infant Jesus of Prague to places she would visit, especially newly-built monasteries. According to legend, St. Theresa gave one such copy of the statue to a Spanish noblewoman Doña Isabella Manrique de Lara.

A Most Esteemed Heirloom

The legend gives way to facts as we see the Santo Niño given as a wedding gift by Doña Isabella to her daughter, Doña Maria. Fr. Faroni narrates a beautiful story wherein one of the daughters of Doña Maria had a vision of the Christ Child. The young girl, Polyxena, had been weeping because she had been promised in marriage to a Czech nobleman although she did not like to leave Spain. The Christ Child assured her and said her task would be to spread piety to him, the Infant Jesus.

Fr. Faroni writes that thereafter, the next morning “a splendidly equipped procession set out from Spain… carrying a beautiful bride to the Czech lands… To Prague, the bride carried with her the most precious gift of all… the statue of baby Jesus…”

The book, “The Holy Infant of Prague” by Josef Forbelsky, Jan Royt and Mojmir Horyna (which I bought in Prague) then documents the history of the Infant Jesus of Prague in a detailed and factual manner.

In 1628, the Infant Jesus of Prague statue, a precious heirloom of the daughters of Doña Maria, came to the possession of the Church. Lady Polyxena, the young bride who carried the statue from Spain to Prague, now widowed, presented the little statue to the Order of the Barefooted Carmelites at the Church of the Virgin Mary the Victorious in Mala Strana.

Lady Polyxena had become one of the most prominent ladies of the kingdom of Bohemia (as the place was then regarded). In words which have gone down the ages, Lady Polyxena is believed to have said, “I am giving you what I most esteem of my possessions; keep the sculpture in reverence, and you will be well off.”

From then on, the little statue became part of the history of Prague, sharing its joys and trials. In 1631, the Saxons invaded Prague and plundered the Carmelite church and cloister as well. The little Infant Jesus of Prague was likewise desecrated and got lost.

How the Infant Jesus of Prague was found is a touching story told by Fr. Faroni.

In 1638, when peace had reigned once more in Prague, the Carmelites returned to their monastery. A certain Fr. Cyril mourned hard the loss of the statue. One day, while he was praying before the ruined altar, he heard the sound of a child crying. Behind the altar, he found the precious statue buried in the rubble – but with hands lost. Fr. Cyril was in shock as the Child told him, “Return my arms to me, and I shall return peace to you! The more you honour me, the more I shall bless you.”

You would think it just a simple matter but at that point in time, the monastery had no money. So, the Infant Jesus of Prague was displayed without arms with which to bless the people.

One day, a veteran soldier happened to kneel before the statue. He had seen the horrors of war and was plagued by images of suffering children. Looking at the disabled Infant Jesus of Prague on the altar, he was so touched he got his leather pouch which contained money, his plunder from the battles. He laid it before the statue.

Upon discovering the money, Fr. Cyril lost no time in looking around for a renowned sculptor. But despite the skill of the sculptor, the following morning the monks found the arms on the floor. This happened several times. Finally, a shy young man came to the monastery offering to repair the Infant Jesus of Prague. No one knew who he was. But observing the way he worked, Fr. Cyril noticed he was so tender and gentle towards the Infant Jesus.

That night, the monks could not sleep. They were in a hurry to check the following morning if the arms had again fallen off. But at last, they found the satisfied face of the Infant Jesus of Prague with both arms intact. When the monks looked for the young sculptor, they could no longer find him. The legend of the mysterious sculptor spread across the city. Many believed he was an angel, and the renown of the Infant Jesus of Prague once again spread.

The Swedish Invasion of Prague

In April 1639, the powerful Swedish army began a siege of the city. The frightened citizens hurried off to the Infant Jesus of Prague as services were held day and night at the Church of Our Lady Victorious in the Little Quarter. They learned that the besieging army under General Banner had decided to invade the city. But to the disbelief of the residents, they learned one morning that the army had decided to pull out. It is said that a messenger riding a foaming horse had dashed up to the general’s tent. And the army commander after a short discussion decided to retreat.

No reason was given for the extraordinary pull-out. But grateful residents ascribe this to the miraculous Holy Infant.

An Array of Treasures and Miracles

Through the years, the Gracious Infant Jesus (as it has come to be called) has been showered by gifts fit for a royal King. Emperors, kings, queens, and the nobility have knelt before the statue and bequeathed it with gems, royal vestments, a crown, and even portions of their estate. The rich vestments of the Infant Jesus of Prague number almost 60 pieces, including one given by the famous Empress Maria Theresa of Austria.

With the miracles and favors associated with it, the Prague icon became famous throughout Europe. Its history is well-documented especially with the book by P. Emerich a S. Stephano published in the early 18th century in German and in Czech.

The Infant Jesus of Prague Today

Walking the cobbled pavements of Prague in October 2010, I was wondering if a true devotion to the Infant Jesus of Prague still lives on today among its residents. After all, the country has endured two world wars and especially the onslaught of Communist Russia in the late 20th century. We had only a day to tour this dazzling city, an outstanding cultural treasure with its architecture of varying artistic styles.

I had to skip a few landmarks to be able to spend more time with the Infant Jesus of Prague. The altar of the Prague Infant is on the side and it is housed in a glazed case of immense value. It stands on a pedestal adorned with crystals, Czech garnets and a large ruby. There are twenty little angels around it. On that particular day, it was dressed in royal green vestments.

Much later, reading a magazine published by the Carmelites running the Sanctuary, I was so pleased and happy. At the left side of the cover, the little Prague Infant was there – so little you would miss Him. But in the center I found the countenance of a black African little boy. The Carmelite missions had been reaching out to Central Africa.

It is only fitting for royalty to give royal gifts to the Little King as He is the greatest King of all. But the Little Jesus who grew up with Joseph and Mary in a little house felt human emotions too and how he must grieve for the unfortunate children all over the world beset with hunger, ailments, grievous misfortunes, and – for millions of unborn – the threat of abortion.

Nowadays, when we gaze at the loving face of the Infant Jesus of Prague, it would be good to see not only His loving countenance but also that of the poor little children around the world. The greatest love we can offer the Infant Jesus is to love children, especially the poorest. Then, everyday of the year would be Christmas.

Click here to return from Infant Jesus of Prague to Inspirational Stories.