Our Lady of All Nations: Overview

A world Marian fluvial parade and prayer vigil was organized in New York City. The World Peace Regatta featured a consecration of the whole world to Mary under Her title of "The Lady of All Nations," talks by international Marian leaders on Mary's role in God's plan of salvation, a Eucharistic Celebration and a procession around the area of Battery Park, beneath the majestic twin towers of the World Trade Center. Some time afterwards, in a written testimony, Marian leader Judge Dan Lynch wrote "Christina (Gallagher) waved her arm toward the twin towers and prophesied, ‘Dan, if Americans don't turn back to God, all of this will be destroyed.''' The date was September 11, 1999, exactly two years to the date of the now infamous "September 11 Day of Terror."

Flashback to March 25, 1945 - Feast of the Annunciation - the beginning of the apparitions of the Blessed Virgin Mary as Our Lady of All Nations to Ida Peederman (b.1905 - d. 1996). After that 25th day of March, Our Lady's apparitions lasted for fourteen more years, during which over sixty messages were relayed to Ida. Unlike the visits of Our Lady in France (Lourdes) and Portugal (Fatima), there was no pattern in the dates of the Amsterdam apparitions and neither was there any warning. Most of the messages Ida received in her home in Amsterdam and her sister was always on hand to write down what Ida would repeat after Our Lady. To this "spiritual dictation'' were later added personal notes describing things Our Lady had allowed Ida to see. Once the messages had been written down, Ida would take these to her director. In many instances, Ida did not fully understand the meaning of Our Lady's messages. But she deemed this unimportant, as she was only Our Lady's "instrument" for passing on the messages to those who needed them. 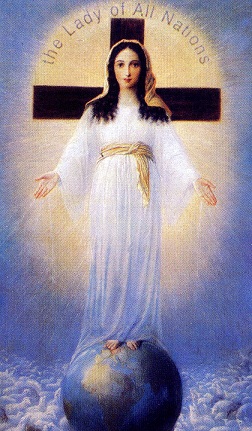 Of the over sixty messages, there are several that stand out. There are those that contain detailed "instructions" on how Our Lady should be pictured so that people the world over may recognize her:

"Look at My Image and study it well. Retain this clearly in your mind. I am standing on the globe and both my feet are resting firmly on it. You also clearly see My hands, My face, My hair and My veil. All the rest is in a haze. Look closely to what protrudes to both sides of My shoulders and above My head...

"Now I will explain to you why I come in this form. I am the Lady who stands in front of the Cross. My head, hands and feet are like those of any human being. The body, however, is as of the Holy Spirit, because the Son came through the will of the Father. But now the Spirit will descend upon the world and for this reason I want people to pray for His advent. I am standing on the globe because this message concerns the whole world...

(Pointing to the sash on Her waist) "This betokens the loin cloth of the Son. For I stand as the Lady in front of the Cross of the Son. This image will precede a new of dogma. I am standing on the globe. Around the globe, My child, you thought you were seeing clouds.... My Child, imprint this message deep into your memory and transmit it correctly: This flock of sheep (the "clouds") represents the Nations of the whole world, who will not find rest until they lie down and quietly look up to the Cross, the center of this world. Now look at my hands... these are the three rays of Grace, Redemption and Peace. ''

Ida entrusted the task of painting Our Lady's image to German painter Heinrich Repke. When the painting was finished, Ida asked Our Lady if the picture met her approval. Our Lady just smiled.

An important message of Our Lady concerns the wording of the prayer that she would like to make known. The simple prayer - to be recited daily in front of the Crucifix - should always accompany Our Lady's image:

“Lord Jesus Christ, Son of the Father, send now Thy Spirit over all the earth. Let the Holy Spirit live in the hearts of all nations, that they may be preserved from degeneration, disaster and war. May the Lady of All Nations, who once was Mary, be our Advocate! Amen.”

"All nations must worship the Lord and pray for the true and holy Spirit. That is why I have given this prayer, short and to the point. Pray it daily whatever task you are engaged in this busy and modern world. This prayer is given for this purpose; to call down the true Spirit of the world, to protect nations from moral decline, disaster and war and the conversion of the world."

To many theologians, starting with Ida's spiritual director, the words "who once was Mary'' was a source of great puzzlement: Mary is and will always be Mary! In fact, the wording of the prayer was objected to several times by ecclesiastical authorities that its first release did not include that puzzling phrase. But Our Lady did not agree with the omission and she made this very clear in her next message to Ida:

"No change must be made in the text of the prayer. The words ‘who once was Mary' means many people have known Mary as Mary. Now, however, in this new epoch which is beginning, I want to be the Lady of All Nations. Everybody, understand this new name. The Lord and Creator chose Mary from among all women to become the Mother of His Divine Son. But she became the 'Lady' at the foot of the Cross. This is how it must remain."

In the year 1952 the complete unedited prayer received ecclesiastical approval and the prayer-picture quickly began to find its way among the masses of the Netherlands and then of the world. Other messages from Our Lady include "reminders" to priests and religious, women and men, children and youth, and to the nations of the world.

To the priests and religious, Our Lady says:

"You are all apostles and handmaids of the Father, Son and Holy Spirit. The Lady is not going to put any blame on you. She knows She is dealing with human beings. Life is hard on you these days; but I still exhort you to act in the Spirit of the Lord and Master, Jesus Christ. Be of one mind among yourselves. How can the Church be great and one if you are divided among yourselves… All you Nations, stand by your apostles; do not make things unnecessarily difficult for them... I repeat, pray for good priests; and pray for an increase of good priests."

Our Lady's message to men and women, when taken only at face value, can easily be considered by militant feminist groups as a throwback to the dark ages! But there is great and deep sense in what Our Lady says to men and women:

"Do you still know what your task is?... You, woman, must set an example. Return to your womanhood. Women of this world, do you know what it is to be a woman? It means to make sacrifices. Lay aside all your egoism and vanity and try to lead to the center - to the Cross - all the children and those still grazing and you yourselves, take part in the Sacrifice.” To the men, she said, "I have one question to ask you. Where are the soldiers of Christ? From you men, should come the strength and the will to lead the world to its sole Ruler, the Lord Jesus Christ."

To children and the youth Our Lady is very maternal and hopeful:

“You elders of this world, do teach your children to find again the way of the Cross. I, as the Lady of All Nations, will assist them… You will lead your children to the Lord Jesus Christ; you will teach them again how to pray…”

And lastly, to All Nations:

“My prophecy, ‘From now on all generations will call me blessed’ will be fulfilled more than ever before, once the dogma has been proclaimed. When this happens - and it will be the last step in Marian history - the Lady of All Nations will give peace, the true peace, throughout the world. But the Nations must say My Prayer in union with the Church. They will then know that the Lady has come as Coredemptrix, Mediatrix and Advocate.”

The Congregation of Faith and Doctrine of the Catholic Church has already officially proclaimed four Marian dogmas: that of the Divine Motherhood of Mary, her Perpetual Virginity, her Immaculate Conception, and her Assumption. It is interesting to note that the Dogma of the Assumption, proclaimed in 1950, had to naturally precede this fifth dogma: that of Our Lady's coronation as "Coredemptrix, Mediatrix and Advocate."

Revealed in August 15, 1951, this 'last and final doctrinal pillar which is the keystone in Marian history' has not surprisingly, sparked many a debate in the Church itself. Who better to explain this fifth dogma than Our Lady Herself, in Her apparitions to lda?

“Never has Miriam or Mary been called officially co-Redemptrix in the Community - in the Church. Never has She been called officially Mediatrix. Never has She been called officially Advocate. These three notions are closely connected; they form one whole. This will therefore be the keystone in Marian history and will ultimately become the dogma of co-Redemptrix, Mediatrix and Advocate. And now I am not blaming the theologians when I say: why can you not agree on this dogma? I will explain it once more and make it clear. The Father sent the Lord Jesus Christ as the Redeemer of All Nations. The Lord Jesus Christ was the Redeemer of All Nations from the beginning. He became so officially in the Sacrifice and in His going to the Father. Miriam or Mary became the Handmaid of the Lord, chosen by the Father and the Holy Spirit. In virtue of this election She was from the outset co-Redemptrix, Mediatrix and Advocate of All Nations.

Because Mary is co-Redemptrix She is also Mediatrix and Advocate; not only because She is the Mother of the Lord Jesus Christ but - and mark this well - because She is the Immaculate Conception… You will be able to find these words and ideas (in the books). I ask you to work for this dogma. No, do not be afraid. A struggle will ensue. You will be attacked by the others; but the simplicity of this dogma lies in these last thoughts which Mary, the Lady of All Nations, is passing on to you today. Do battle and ask for the dogma: it is the crowning glory of your Lady.”

We are in the Year of Our Lord 2001, exactly fifty years after the revelation of this fifth and final Marian dogma. But given what is happening in the world today - terrorism, abortions by the millions, euthanasia, greed, corruption, racism, the willful destruction of nature - do we really want to know where we are going?

But then again, even Our Lady is hopeful of the outcome. In her apparitions in Amsterdam she seems to be in her most militant. It is as if she is encouraging us to be as strong in the fight against evil so that we can all see the day when all nations are led back to the Father. Until that day comes, we should continue to pray for guidance from the Holy Spirit and grace from Our Lady... who once was Mary.

Click here to return from Our Lady of All Nations Story to Apparitions.