The man in the small, dirty prison cell tried to get up. It was with difficulty that he put himself on his knees. Putting hands together as in prayer, he mumbled silently. As his clothes were torn, it could be seen that his stomach was swollen and all over his body were bruises.

"Lorenzo, hijo, are you already awake?" Fr. Miguel, in the adjacent cell, called out to him. There were six of them who had come from the Philippines and a year later they were now in this filthy Japanese prison, in separate cells, with thin wooden partitions. Now, only five remained. Fr. Antonio Gonzalez, the superior of their missionary expedition, died three days ago, praising God to the end. His demeanor amazed the Japanese guards and infuriated the two Japanese judges, Sakakibara and Baba.

"Yes, Padre. I am praying that God give me the strength and fortitude that I need," Lorenzo Ruiz replied. 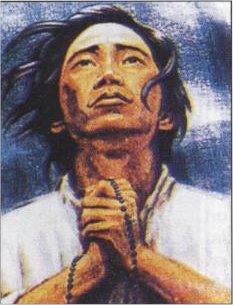 In between his prayers, Lorenzo Ruiz stretched out his legs and stood up. He was of medium height, fair-skinned, and had the slanting eyes of the Chinese. During the trials the previous days, he was referred to as the mestizo from Binondo, Filipinas, as if to distinguish him from his companions who were Spanish, Japanese, and French.

"Holy Mary, Mother of God, pray for us sinners…" It was this prayer Lorenzo Ruiz kept on repeating. And as he braced himself for this momentous day, snapshots of his life flashed in his mind. He had fled from Manila because he had a quarrel with a Spaniard. Being a Chinese mestizo, he felt he would not be given justice. Running to the Dominican Fathers for help, he jumped blindly at the chance to get out of the country.

"Padre, please take care of my family," Lorenzo Ruiz had pleaded with Fr. Domingo Gonzalez, the Superior Provincial of the Dominicans. Fr. Gonzalez nodded vigorously. He knew this young man, Lorenzo Ruiz. He was a good man, an excellent escribano. But as he looked intently at him, a strange feeling of anxiety swept over him.

Unlike the others, this young man did not know where the champan was headed.

Salve Regina, mater misericordiae...It was Fr. Miguel's booming voice which broke into Lorenzo's thoughts. And he joined with fervor and in a while, there were already five voices supplicating the Virgin Mother. He missed their leader, Fr. Antonio. But the Padre's fervor still seemed to surround them.

Lorenzo Ruiz sighed deeply as he recalled those times of reflection with Fr. Antonio. The tall, elegant Spaniard whom he had come to respect deeply had taught him many things. Many times, he had been argumentative with him. "Padre, I did not come to Japan to be a martyr. Unlike you, I have a wife, two sons and a daughter in Manila. I have more to lose than you. If the Japanese catch us and let me go, I will really be glad for that."

“But where will you go?" Fr. Antonio had asked him bluntly. And it was true; Lorenzo did not know where he would go.

To be a martyr for Christ! The thought never really crossed his mind all these years that he was a devout Catholic. And yet, the one year that they had spent in hiding from the Japanese, when they searched for Japanese Christians and tried to revive their faith, he came to admire deeply these Dominican fathers. In his mind, they were really heroes for Christ.

"Remember, Lorenzo, what is important is the love you have for the Lord. If they catch us and torture us, every pain should be offered for Him. Learn to say: dear Jesus, this is nothing compared to what You have suffered for us. This is for Your glory. Grant us the strength we need and make us look forward to the joys of Heaven."

How many times had he heard Fr. Antonio saying this. The Padre had been practicing all these years for the glorious martyrdom he really wanted to suffer!

And he? Some months after they landed in Japan, he got caught up in the fervor and zeal of his companions. It was not that he forgot all about his wife and children. He remembered them always but he grew in faith. He entrusted them to the good Lord. What if the dreaded Japanese tortured him along with these religious? His mind and heart gave various answers. He vacillated but months before they were finally captured, he told Fr. Antonio, "If they ask me to step on a crucifix and rosary - that I can never do."

The voice of Lazaro, a leper from Kyoto, intruded into his thoughts. "Lorenzo, that was a beautiful and brave answer you gave the tribunal. Did you frame those words in your mind? Please say them now. it will give me strength hear you."

"Bravo, Lorenzo! But how long do you think will we have to suffer before God takes us to Heaven?" With a trembling voice, Lazaro asked this question upper- most in their minds. He was thinking of the hundreds of water balsas rammed down their throats and of the excruciating pain caused by the long needles thrust under their fingernails.

Lorenzo Ruiz gave no reply. He was trying to gear up for the last phase of the battle. Just like the other Christians before them, they would be mounted on horses so they could be seen by all and would be led to Nishizaka Hill, the "mountain of the martyrs". Surely, there would be taunts and insults. Over and over again, they would be asked to deny their Faith. A few meters away, the Portuguese traders would be seeing them. And so would a few clandestine Japanese Christians. And he, Lorenzo Ruiz, would not let God down. He, the lone Filipino, little and unknown, would stand bravely for Christ. He may have had so many tragic mistakes in his life but this was an opportunity to redeem them all.

"Just a little suffering more… and we will be in Heaven… together. .. the six of us," Fr. Antonio had constantly repeated. "We must help one another to be victorious!" he had frequently rallied his companions.

"Out Out! All of you!” the big-bellied Japanese shouted at them. They were herded and assembled for the march up to Nishizaka Hill where they would be hanged from the gallows, upside down. The five of them, Lorenzo Ruiz of Manila, Lazaro of Kyoto, Fr. Vicente Shiwozuka de la Cruz, Fr. Guillermo Courtet and Fr. Miguel de Aozaraza, smiled at one another, as best as they could because their mouths were muzzled to prevent them from making this an opportunity to preach to the crowd. They had a pact to be together in prayer and suffering all the way.

Despite the pains wracking his body, Lorenzo Ruiz tried to sit erect on the horse. In his mind, he renewed what he said previously to the two Japanese judges and the crowd assembled: "...I am a Christian, and I shall die for God, and for Him I will give many thousands of lives if I had them."

He kept on repeating a prayer, a simple prayer for a simple man like him, "Holy Mary, Mother of God, pray for us sinners, now and at the hour of our death." It would be like Binondo all over again, he told himself bravely. Just like those days when he would join the rosary processions as a full member of the Confraternity of the Holy Rosary.

But this was the ultimate thing...this was the arena of battle. This procession would lead to God Himself. He could not fail his countrymen...his beloved Señora del Santissimo Rosario...the good Lord he had served as a sacristan.

Up the hill, he went. Lorenzo Ruiz, the soldier of God.