Priests take Mary as Mother into the interior ‘home’ of their priesthood, for they belong to the faithful in whose rebirth and development the Mother of God cooperates with maternal love. John, the disciple whom Jesus loved, is the model of the priests in their love and devotion to Mary. John took Mary into his home: “And from that hour the disciple took her to his own home” (Jn 19:27). The priests, following the example of the disciple John, also have to take Mary into the interior home of their priesthood and welcome the Mother of Christ as their mother. Mary deserves the offering of the full rights in the home of their priestly lives, of their faith, of their affections, and of their commitments. The priests have to give to Mary the full possession of her rights, because she is their mother. 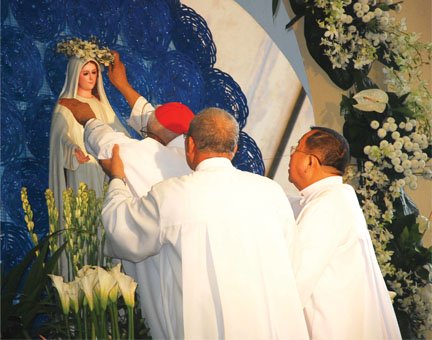 Mary is the mother of the priests’ special friendship with Christ. Mary shared in the same friendship with Christ and understood most completely the meaning of the words spoken to her during his agony on the Cross: “Woman, behold your son… behold your mother” (Jn 19:26-27). She cooperates, with a mother’s love, in the rebirth of the brothers and friends of her Son and does everything in order that they may not betray this holy friendship.

Mary is the mother and model of priests in their spiritual battle against the forces of evil. The priests turn their eyes to the Mother of God, the “woman clothed with the sun,” for she is the one who continues to take part in the spiritual battle for the victory of good over evil. Mary is an example to priests in their thanksgiving to God for the gift of the priesthood which they have received, and this is best expressed in her Magnificat: “The Almighty has done great things for me, and holy is His name” (Lk 1:49).

Mary’s maternal role in the life of the priests includes also her function as their guide, adviser, and encourager. Mary is the mother of priestly trust and confidence. The person of Mary is necessary as a reference point in the preparation of future priests. Mary’s role in the formation of future priests is indispensable, since she is the Mother of Christ, and the one who helped him prepare for his priestly mission. She can help those who wish to dedicate themselves to Christ to make this important and responsible decision of their priestly vocation in their lives.

Mary is the Mother of the “Alter Christus” and of priestly vocation. Those who are called to be “Alter Christus” entrust themselves to Mary, in order that they may entrust, dedicate, and give themselves completely to Christ. Mary is presented in the apostolic exhortation Pastores Dabo Vobis as the Mother and Teacher of the Priesthood. Mary is the Mother to whom every aspect of the on-going formation of priests can be directed. Mary is, therefore, the mother of priestly formation.

Mary, Mother of Christ: A Mother in the Human Aspect of Priestly Formation

Mary is the model of the spiritual life of the priests because she is “the human being who has responded better than any other to God’s call”. Mary is the model of priestly spirituality. She is the priests’ model in their spiritual calling to a life according to the Spirit and the radicalism of the Gospel. Mary is the spiritual guide of the priests, in the attainment of their call to mature manhood, to the measure of the stature of the fullness of Christ (Eph 4:3), and in their call to the perfection of charity and holiness.

Mary, Model of Total Response to God’s Call: A Model in the Spiritual Aspect of Priestly Formation

Mary is the model of priests in their pilgrimage of faith. She, the woman of faith, is presented to priests as their sublime example in their pilgrimage of faith. Mary is the priestly model of surrender, of trust, and of love for Christ – priests can learn from Mary to surrender themselves to God’s will in all things. She is the best example of discipleship of Christ.

Mary is the sublime example of prayer for priests, in their striving constantly for the experience of a genuine personal encounter with Jesus, a trusting dialogue with the Father, and a deep experience of the Spirit. She is the model of the priests’ prayer life, she who responded better than anyone to God’s call, in renewing their external fidelity to prayer. Priests can turn to her in their prayer: “for never was it known that anyone who fled to her protection, implored her help or sought her intercession was left unaided”.

Mary, Educator of the One Eternal Priest: A Teacher in the Intellectual Aspect of Priestly Formation

Mary, who was “called to educate the one Eternal Priest,” is the teacher of the priesthood. Mary helped educate her Son, ‘who became docile and subject to her motherly authority’ and prepare Him for priestly mission. She is the teacher of the priests in their calling to live, according to the radicalism of the Gospel, the evangelical counsels of obedience, chastity, and poverty.

Mary is the teacher of purity for priests and is the model of Priestly Vocation to Celibacy. Priests can have recourse to the Blessed Virgin, especially when they meet difficulties in the chosen path of celibacy.

Mary is the teacher of the relationship of priests with women. The priests, by virtue of their vocation and mission, discover in a new way the question of the dignity and vocation of women, both in the Church and in today’s world. From the Blessed Virgin Mary, the priests must seek a proper relationship with women, and must have a profound understanding of the example of the attitude of Christ towards them.

Mary, Servant and Disciple of the Word: An Example in the Pastoral Aspect of Priestly Formation

Mary is presented by John Paul II as the “servant and disciple of the Word to the point of conceiving, in her heart and in her flesh, the Word made man, so as to give him to mankind”.

She is the priests’ example in pastoral charity, in imitating Christ’s self-giving and sacrifice and in the giving of themselves in life to His flock.

Mary is the Queen of the Apostles to whom the priests can look on as their model in their pastoral ministry. Priests, listening to Mary and obeying the words of Jesus, can truly believe that their ministry of evangelization will be blessed.

Mary is the model of priestly ministry. She can make the priests understand the whole beauty, joy and power of their priestly service, enabling them to live their ministry unreservedly in total dedication and immolation for the service of God and of souls.

Mary is always the priests’ companion as they do their work of evangelization and ministry with spiritual fruitfulness, in their place of mission.

She is the priestly model of total availability and response to God’s call to service. Priests, through Mary’s intercession and example, can give themselves to Christ, to his service, to his priesthood, and to all the priestly duties.

With Mary, the Mother of Christ, priests are being formed more and more into the likeness of the Heart of Jesus, the High Priest-Servant-Victim and Shepherd in all the aspects of their priestly life and formation. In union with Mary, the Mother of Priests, they can go forward in their specific call to holiness, to form in themselves the Pastoral Charity to which they are called, and persevere in faithfulness in living out to the full the radicalism of the Gospel values.

With Mary, the Mother of the Redeemer, united with the “Totus tuus” of John Paul II, priests can give themselves completely to God and give that total space for Him in their lives. With the Blessed Virgin Mary, they can continue to walk along in the Holy Journey of their Priesthood towards the fullness of union with God and configuration to Christ.

With Mary, the Mother of Priests, priests can be more united with their brothers, in the Service of the Church and humanity. With Mary, they can better understand and live their vocation and mission in the very heart of the Church, for She is truly the Mother and Teacher of their Priesthood.

Just box this or use as space-filler, or text on OBC.

Click here to return from Mary Mother of Priests to Catholic Spirituality.