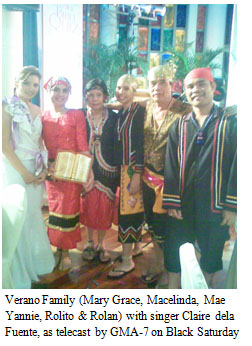 I still cannot believe up to this moment that we are the Grand Champion in the Catholic Bishops Conference of the Philippines (CBCP) sponsored 3rd National Catholic Family Bible Quiz held last year at The Manila Peninsula in Makati (Philippines).

“Am I dreaming?” No, I am not. Our winning was more of a dream coming to reality, though months before, it seemed a far-away vision possible only in dreams. Our list of obstacles seemed endless: the pressures of everyday living, the negative feelings of anxiety, fear, doubt and exhaustion, the responsibilities our family members have to attend to… Yet through it all, God gave our family this precious gift – a miracle to remind us to trust in Him no matter what. Yes, miracles do happen!

This reminded me of the many trials I encountered in the past to which I thought there were no solutions.

Way back year 1989, my husband lost his job in the government. His superiors were not happy with him because he did not sign papers for “Ghost Deliveries”. My children were still very young at that time and to raise seven children without a stable income is not an easy task!

Both of us were jobless because I resigned when I had my first born. I preferred to take care of my kids and family rather than having to work in an office. We had only a small variety store, a “motor cab,” a little income from the coconut land and a boarding house I inherited from my parents. The income was sufficient for us at the beginning. But when my children reached college, we were buried in debt. Our land titles were used as loan collateral at the bank, and all our jewelry were pawned. We were terribly, financially hard up at that time, to the point that I would ask myself, “Where shall I find rice to cook for our next meal?”

However, through that hard time, we remained devoted to the Lord. We were active in our parish’s Couples for Christ (CFC) ministry. My husband was a lay minister, I was a catechist, our children were members of the Knights of the Altar and the church choir. We used to attend mass together when my children were still young. We looked like a train, what with the age gaps between my children being so close.

Yet in spite of our faith in God, the troubles that we had had affected my health to the extent that I woke up one morning to find that my two legs were trembling and I had no control over them. My heart beat so fast and it was hard for me to breathe. My doctor said, “What you had was due to anxieties and worries. Try to loosen up a bit and have fun!”

She prescribed a nerve relaxant. I felt calm every time I took the medicine but when its effect lapsed, the symptoms kept coming back. So I relied on the medicine for a long period of time.

Meanwhile in CFC, we had signed a covenant that exhorted us “to read the scriptures everyday for at least fifteen minutes”. One day, while I was reading the bible I came across Isaiah 41:10:

“Do not be afraid – I am with you! I am your God – let nothing terrify you! I will make you strong and help you; I will protect you and save you.”

From then on, I memorized the verse. I say it with faith every time I have the “attack”. I realized that I felt calm and relaxed as I uttered the verse.

There was also one time when my eldest son, who is a special child, had his legs beaten up by a bad guy in school. My son couldn’t walk for several days and had tantrums everyday. He became quite destructive. He bumped his head on the wall many times while uttering bad words. He would lock himself up in his room and destroyed anything he could lay his hands on. He stopped taking baths and going with us to church like he used to. I had a difficult time calming him down. During his tantrums, I was normally alone, what with all my other children in school and my husband at work.

The psychiatrist who examined him prescribed various kinds of vitamins and a kind of medicine usually given to drug addicts. When he became worse, we decided to bring him to Manila for further treatment.

Despite my anguish, I did not give up my devotion to the Lord. I even discovered that the more I read the Bible, the more courageous and strengthened I became. Among the verses that comforted me much were: “I am with you always” (Matthew 28:20), “If you believe, you will receive whatever you ask in prayer” (Matthew 21:22), “Let it happen then as you believe”(Matthew 9:29), “I am telling you the truth; those who believe in me will do what I do – yes, they will do even greater things” (John 14:12), “Everything is possible for the person who has faith” (Mark 9:23), “I assure you that whoever tells this hill to get up and throw itself in the sea and does not doubt in his heart, but believes what he says will happen, it will be done for him” (Mark 11:23) and “Whoever believes in him will not be disappointed” (Romans 10:11).

Once, I was drug dependent but by constantly reading these verses, my faith deepened. I decided to stop all my medications. I was determined to train my mind to believe – erase all the doubts in my thoughts.

“Yes, indeed! My faith in Him worked! Praise the Lord!”

Proven as effective, I applied the same to my son. I stopped all his medication and instead I had him “prayed over” everyday. Now, you can talk to my 31-year-old special son in English, a legacy received from his special education teacher, Sister Clement, a Columban nun who has now returned to Ireland.

But even then, my problems didn’t wane. For almost three years, I suffered hemorrhage. My stay in the hospital became very expensive. I went twice to Cebu (a province in the Philippines) for check-ups with different doctors, yet their diagnosis turned out to be the same – I had a growing cyst inside my womb. I submitted myself to Dilatation and Curettage (D&C) but still the bleeding continued.

As I was taking the medicines doctors prescribed, I happened to read the medical literature of the injections and tablets I was taking. I learned that prolonged usage could have an adverse reaction that could result in blindness. A cousin who took the same medication was now experiencing blurred vision.

From then on, I discontinued everything, even check-ups. I recuperated at home. My two older sisters who had hemorrhage months earlier were already operated on, but I refused to have a similar operation.

So, I prayed. During intense prayers, a vision flashed in my mind many times. I was always reminded of that woman in the Bible who suffered twelve years of severe bleeding, she who had said: “If only I could touch His cloak, I will get well!” With my eyes closed, I would imagine myself as that woman touching the edge of Jesus’ cloak.

“Courage my daughter, your faith has made you well,” Jesus said to the woman (Matthew 9:20-22). By God’s mercy, my bleeding has ceased, and I did not require surgery.

Yes, I am a witness to God’s miracles! And once again, He revealed himself to us through this Bible Quiz. The experience in Manila was in itself a great blessing for us.

I remembered when we were on our way to supper, one of our guides from the Secretariat told us, “For the past two national competitions, participants from Mindanao were always at the bottom!”

During the rehearsal, we had time to meet the other families from different regions. Looking at them, I felt a little bit nervous especially since there was a rumor that our two competitors were an ex-pastor and an ex-seminarian.

We were also outnumbered by them so my daughter, who was seated at my right side, comforted me by citing 1 Maccabees 3:19: “Victory in battle does not depend on who has the largest army; it is the Lord’s power that determines the outcome.”

I prayed hard and referred to my favorite passage , Matthew 21:22, which ends with “But let thy will be done, Lord.”

Before the proclamation of the winners, the NCFBQ chairwoman, Elvira Yap Go gave on the spot different verses for the family to read and to share what is in the verses that struck them the most. Ours was taken from St. Luke 4:16-18. When I read the phrase, “The spirit of the Lord is upon me,” I was assured that very moment that our prayers had been granted.

“Praise the Lord! All the glory be to Him forever and ever! Amen!”

Click here to return from Miracles Do Happen to Inspirational Stories.