Miracles of the Eucharist: The Thorn-Crowned Head 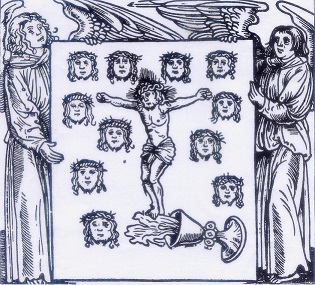 The scripture passage which goes “The Lord works in mysterious ways, His wonders to behold” is indeed true in the different miracles of the Eucharist that happened in several places of Europe at different periods of time. These miracles happened to strengthen the faith of the faithful.

With Bob and Penny Lord in “Eucharistic Miracles,” let me bring you to a place – a little town of Walldurn between Frankfurt and Wurzburg, Germany – in the year 1330. An elderly priest by the name of Heinrich Otto was celebrating Mass at the church of Saint George of Walldurn. After he raised the host and chalice for the consecration, he accidentally bumped into the chalice, spilling the contents, the Precious Blood of Jesus onto the corporal. Lo and behold! The wine turned into actual blood, forming a design of the Crucified Christ surrounded by eleven heads of Jesus crowned with thorns. Fr. Otto was shocked by what he saw on the corporal. What do you think should he have done?

Well, maybe he should have called on the congregation to witness the miracle of the Eucharist and give praise and thanks to the Lord for this wonderful gift. But he did not; instead, he pushed the corporal to the side and continued the Mass.

When the Mass was finished and Fr. Otto was left alone, he opened the corporal and the scene portrayed in this miraculous painting was clearer. It seems that it never occurred to him that the miracle was intended for others also. He took the corporal and hid it on the table under the altar. He saw to it that no one would find it.

The Unique Image in the Corporal

What happened to Fr. Otto?

Fr. Otto suffered great mental anguish from the time of the miraculous occurrence. The image on the corporal haunted him day and night. Then he got sick. It dawned on his conscience that he should free himself of this sin of omission. He wanted to confess. He called in a fellow priest and confessed the entire incident to him. He however begged the priest to wait until he died and then remove the corporal from where he hid it. Yes, it had to be shared with people to strengthen their faith in the presence of Christ in the Eucharist. Not long after that, Fr. Otto died peacefully.

The priest to whom Fr. Otto confessed and some of his fellow priests rushed to the church to see for themselves the miracle Fr. Otto had revealed. Finding the sacred corporal, the priests knelt in reverence before this magnificent miracle which the Lord had gifted them.

In a solemn ceremony, the corporal was put on display for the veneration of the faithful, Germans and Europeans alike. Countless pilgrims came to Walldurn to venerate the sacred corporal. The good Lord rewarded them with many miracles of healing and conversion. Many returned to the sacraments, especially the Eucharist.

In 1445, the Eucharistic miracle of Walldurn was sent to Rome, with the necessary documents, to be investigated by Vatican authorities. Pope Eugene IV confirmed and authenticated the miracle and bestowed a plenary indulgence on anyone who venerated the corporal during the octave of the Feast of Corpus Christi. The sacred corporal was returned to Walldurn in triumph.

A beautiful church was built in honor of the Eucharistic miracle. The corporal is venerated on the main altar. It is written that over the centuries a great number of sinners have been known to enter the church and immediately repented their sins, seeking out confession in tears.

Let us always believe that Jesus comes alive to us personally in the consecrated host that we receive at Holy Mass. Also, let us remember that a miracle happens everyday in every church in the world at the consecration of the Mass. May we be worthy to receive our Eucharistic Lord.

Click here to return from Miracles of the Eucharist to Inspirational Stories.