Near Death Experience: Proof of Life After Death

Death is a reality that no one can escape. It is a scary and depressing subject so we avoid talking about it although we know very well that we have to confront it sooner or later, whether we like to or not. To all of us, death will come; we do not know how, when or where but it will surely come at a certain point when our individual inheritance of time in this earth expires. But rather than be unduly bothered and scared by something inevitable, this article might change your perspective about death – and life hereafter.

What happens after death?

What happens after death? Is there an afterlife? When a person stops exhibiting vital signs – becomes unconscious, does not have any pulse or heartbeat, stops breathing, has unresponsive pupils, and shows flat ECG or EEG lines (the latter meaning no brain activity) – he is declared officially dead after at least five minutes of being in this condition with no response to all types of resuscitation. When the brain is deprived of oxygen, it dies; then every system of the body stops functioning. Life ends.

What is a near death experience?

Extensive research shows a considerable number of people, including children, who were already declared dead but after some time were revived and came back to life to tell their story – stories that are intriguing, to say the least. This is called near death experience or NDE for short.

When people have near death experience, are they really dead? Since they were able to come back to life despite being declared officially dead, they cannot be considered dead because death is a total cessation of life. There is no returning to earthly life. Many researchers believe that a person having a near death experience, although officially dead, may have gone into a much deeper level of consciousness, a “place” in the brain which the EEG (encephalogram) monitor could not reach, hence the flat lines. Since there is still consciousness present but too deep for medical gadgets to reach and monitor, the person is therefore not dead. This is what happens in a near death experience.

Traits of Near Death Experience

Dr. Moody has identified a set of nine traits that defines near death experience. Not all traits are necessarily present, sometimes there is only one or two, but these are still considered an A Near Death Experience. However, there are some people who have gone through “full-blown” near death experiences and have exhibited all of them. Dr. Moody describes each trait as follows:

1) Out of body experience. By the time, the doctor says, “We have lost him (or her),” the patient undergoes a change in perspective. In this near death experience, he feels himself rising up, and viewing his own body from above. Some of them have said that the spiritual body has a shape and form unlike our physical bodies, though most have a hard time describing it. Some describe it as a cloud of colors or an energy field. This trait is almost always present.

2) Accurate visual perception. A person in a near death experience is fully aware of what is happening. He sees his spirit separate from his body while the medical staff is frantically reviving him. He would keep telling the doctors to stop resuscitating him because he is not dead but nobody could hear or see him. He could travel to the other rooms and see members of his family crying and inconsolable but no one is aware of him.

3) Audible sounds or voices. He could hear clearly all that is being said inside the emergency or operating room but he could not communicate with anyone. He could hear his relatives in their anguish but he is helpless to console them because they cannot hear or see him.

4) Tunnel experience. The patient is suddenly propelled upwards through a dark tunnel with a bright light at the end. The journey is described as puzzling but exhilarating. Some experience being accompanied by a luminous being, while others describe the being as a very beautiful lady bathed in light. Some believe it is an angel, others say she is the Virgin Mary. One patient said he was accompanied by two luminous beings but could not describe their features because of their radiance. At the end of the tunnel was a bright, “beckoning” light. Instead of the tunnel experience, some have described their journey as climbing up a long flight of stairs, at the top of which is a cloud of bright light.

5) Light phenomena. As he enters the bright end of the tunnel, the person seems to be drenched with light. He usually meets beings of light, but not composed of “ordinary” light. They glow with a beautiful and intense luminescence that seems to permeate everything with love. Some have even described the “light” as being synonymous with “love.” Many have claimed to meet a being in radiant light exuding something indescribable, compelling and powerful, but full of love. They sensed “this” to be a Supreme Being. Depending on the patient’s religious background, this being is sometimes called Jesus (by Christians), God or The Great Prophet (by non-Christians), while unbelievers are simply amazed that there is such a “being”.

6) Feeling of peace, painlessness. When the patient is still in his body, he could be feeling pain or fear from sickness or injuries. But as soon as the spirit is out of the body, there is a very strong sense of peace and painlessness causing a blissful feeling. This feeling persists throughout the entire experience.

7) Being in another world. As the patient is propelled through the tunnel, he realizes he is in another world very much different from the one he knew. Some report a “floating experience” and rising to heaven, seeing the universe like astronauts do. Another described himself zooming up and seeing the planets all around him, with the Earth below him resembling a blue marble. A child said he felt like he was passing through stars and finding himself up with the angels.

8) Encountering other beings. They meet relatives and friends who have already died. They speak of them as bathed in an indescribable light gliding about a beautiful pastoral scene with plants, trees and flowers exuding their own inner light. Communication doesn’t take place in words as we know them but in a telepathic verbal way resulting in immediate understanding. Some see a border of beautiful flowers but they are told they could not go beyond it.

Life view. When life review occurs, there are no more physical surroundings. Instead there appears a full color, panoramic, three-dimensional review of one’s life as if the “whole life is there all at once”. Time is greatly compressed and is nothing like the time we know. They described it as “being in eternity”.

Dr. Moody has yet to find a patient who did not have a very deep and positive transformation after his near-death experience. Many scholars and clinicians agree that they are better people because of the experience. This transformation consists of: 1) no fear of dying; 2) sensing the importance of love; 3) a sense of connection to all things – a newly-found appreciation and respect of nature and everything around him; 4) an appreciation of learning or knowledge; 5) a new feeling of self-control or an acute sensitivity to the immediate and long-term consequences of their actions; 6) a sense of urgency or appreciation of the shortness and fragility of life. (“Life is precious and it’s the ‘little things’ that count. Life must be lived to its fullness.”); and 7) a better developed spiritual side. A near death experience always leads to spiritual curiosity and acceptance of religious teachings with more appreciation and understanding.

A Near Death Experience of Children

A Near Death Experiences do not happen only to adults but even to children. Some skeptics say all those stories about A Near Death Experience are fantasies or delusions as a defense mechanism to the reality of death. But how can this be true with children? In the first place, they do not have much concept about life, death and the hereafter. They are candid, honest and simple with no reason for lying or making-up stories, such as in these few examples.

A nine-year old girl underwent a near death experience during an appendectomy. She recalls:

I heard them say my heart stopped… I was floating near the ceiling… saw my mother crying. The doctors thought I was dead. Then a pretty lady came and helped me because I was afraid. We went through a tunnel and went to heaven. There were beautiful flowers there. I was with God and Jesus. They said I had to go back to my mother because she was upset. They said I had to finish my life. So I went back…”

An eleven-year-old child was hit by a car while riding his bike:

I saw myself floating and saw many people around. Then an ambulance arrived. They loaded my body in an ambulance and I tried to follow… I looked around and saw myself in a tunnel with a bright light at the end. I reached the light and saw a lot of people in light. I did not know any of them but they told me to go back; it wasn’t my time to die yet. I was in the light for a long time I felt everyone loved me there. Everyone was happy. I felt that the light was God… 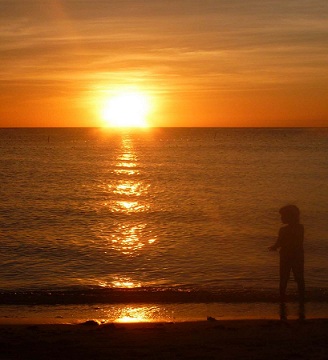 A seven-year old girl had the same typical near death experience traits. She had a drowning accident. She had the tunnel experience. She was helped through the tunnel by a very beautiful lady in light. When she reached the light at the end of the tunnel, she saw many beings in light. “Then I saw Jesus. I did not want to leave him but he smiled and said I have to go back because my Mom and Dad would be sad.” In a later interview, she was asked, “Were you dead at that time you saw Jesus?” She answered candidly, “Oh no, dead people are put in a box and buried ua near death experiencer the ground.”

No near death experience of hell?

Why are near death experiences all about heavenly experiences? Are there no glimpses of hell? In one book of Dr. Moody, I found at least two cases where the poor patients had a terrifying glimpse of hell with writhing figures in red-hot fire accompanied by wailing and gnashing of teeth. Apparently though they were mistakenly taken there, for a horned evil-looking character was shouting, “Hey, get him out of here! He is not supposed to be here!”

I can only surmise that the reason people are not given an experience of hell is because God is so good that He gives a preview of the beauty of the After Life. Not all who die are meritorious of heaven. We know many people die deserving of hell. But because of their near-death experience, there is always a transformation for the better, a result of being given a second chance to change their life into something more deserving of Heaven.

If dying brings us to another life that is as beautiful, blissful and peaceful as how people who have had a glimpse of heaven describe it, then there is no reason to be afraid of death. Indeed, Scripture describes it perfectly: “No eye has seen, nor ear heard, nor the heart of man ever imagined what God has prepared for those who love Him.”

Click here to return from Near Death Experience to Catholic Spirituality.