Led by Our Lady of All Nations

We were not finished with our lunch when the chapel bell rang. A dear old married couple accompanied by a big, gaunt, older man had come. Like three expectant children they sat before the miraculous image in the second row.

When I asked how they came to be here, the couple answered that they had never in their lives heard anything before about Our Lady of All Nations. But before Christmas and again in May the eighty-year-olds had read about her in the paper. They lived in Arnheim, on the German border and had simply traveled by train the long way to Amsterdam on a pilgrimage.

With a lot of humor they described how they had asked several people for directions and finally were accompanied by the man that now silently sat beside them. I gladly told them about the apparitions, the picture, the prayer…. The three were very attentive listeners, even if their hearing wasn’t the best anymore. 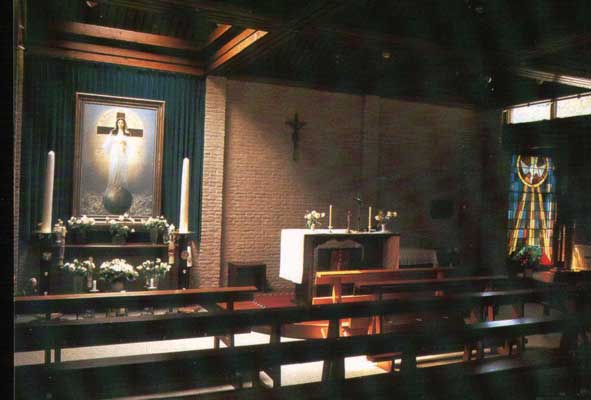 In the meantime, a young man, whose hair was bound together into a little ponytail, came into the chapel. Just as I was speaking about the prayer of Our Lady of All Nations, he came excitedly to help me. He prayed the prayer out loud for them, but all at once was so moved, that he almost cried. He had come because a good friend of his had tragically lost her life a few days before. Now he wanted to pray and asked if he could burn a little incense because his prayers were so weak since he didn’t belong to any community or any church.

Then the older man who had accompanied the eighty-year-old couple begun to tell about his life: at the age of eighteen, during the war, a rifle was pressed into his hand and he was told that he should now also shoot with it.

At that time I threw away my Catholic faith, didn’t pray anymore for many years, and today I am a witness to the fact that there is a devil and there are demons. I had placed myself under their control, and I would have never thought that it would be so easy for me to kill. I tracked down German munitions plants from the air and was responsible for the deaths of people whom I saw burning. I have done many other terrible things as well…

It became clear to me that here sat a sorely tried man, who had simply wanted to show two elderly people the way to the address Diepenbrockstraat 3. Although he had come from Amsterdam, he had never heard of Our Lady of All Nations. But just as calmly as he spoke about the crimes he had committed, he spoke about the merciful love of God, which he experienced through several general confessions and absolutions.

I understand so well when St. Paul says: "Put away the old self and put on the new garment – Jesus Christ! My old life is blotted out. I have been forgiven, and since my conversion I am a new man. But the tormenting memories of what a terrible man I had become won’t let themselves be blotted out.”

Now the elderly couple from Arnheim became real missionaries. They enthusiastically assured their dear companion that it was certainly no coincidence that he was led here to this shrine. It was so stirring to experience how the pilgrims encouraged each other.

As I again began to speak about the great value of the prayer of Our Lady of All Nations, they asked, “So, this prayer is important? Good, then let’s pray!”

And the companion of the aged couple pulled a well-worn rosary out of his pocket and was ready, full of expectation. Quickly I went to get three prayer cards, and then we prayed together one mystery of the rosary and the prayer that Mary had taught here.

The experience of the working of grace through Our Lady of All Nations during that half hour made a profound impression in my heart!

Click here to return from Our Lady of All Nations to Inspirational Stories.