Our Lady of Caysasay

Undoubtedly, numerous stories about Our Lady have sprouted all over the world. However, the story of how she, as Our Lady of Caysasay, has particularly manifested herself in barangay Labac in the town of Taal, Batangas, Philippines distinguishes itself in its antiquity (1603) and in its surprising documentation. The Commemorative Magazine on Our Lady of Caysasay quotes Fr. Pedro Galende,,O.S.A., director of the museum of San Agustin, as saying that the documentation reports are similar to those granted to the famed Lady of Guadalupe apparitions in Mexico in 1531.

The charming story of how the image of Our Lady of Caysaysay was found is best captured in the words of Rev. Fr. Vicente Catapang, former parish priest of Taal, immortalized in old Tagalog novenas:

In the year 1603, in a small barrio of Caysasay, in the town of Taal, a fisherman by the name of Juan Maningcad went out fishing and instead of catching fish, caught a little statue of the Blessed Virgin of the Immaculate Conception about six inches high. Although it was soaked in water it had a heavenly luster and her face twinkled like a star... The news began to spread like lightning until it reached the priest in town, and the judge that represented the King of Spain at that time. Without notice they immediately went to Juan Maningcad's house and there they saw the beautiful image of the Mother of God. They knelt down to venerate it... 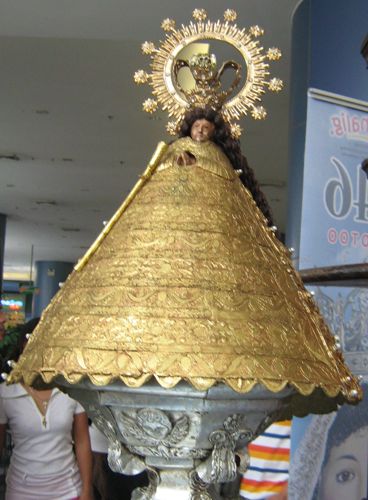 The image was placed under the care of a certain Mrs. Maria del Espiritu Santo and later, given to the parish priest. However, the petite Lady had a penchant for disappearing! One day, the statue disappeared for a long time. After eight years, in 1611, two women gathering firewood near the place where the image was originally found, saw it atop a tall sampaga bush with two lighted candles on each side, amongst kingfisher or casaycasay birds (called caysasay by the Spaniards). The townsfolk and parish priest finally concluded that it was the Virgin's wish to stay in Caysasay so they decided to build a chapel on the very spot where the image was found.

Miracles occurred through the years. While the shrine of Our Lad of Caysasay was being constructed, the workers did not have any water to drink since the place was surrounded by salt water. They invoked Our Lady and fresh water sprang from the rock where they could drink.

Apparitions of Our Lady of Caysasay

Aside from the story of how Juan Maningcad fished out the statue of Our Lady from the Pansipit River, there are historical records of her apparitions in the same area. Fr. Casimiro Diaz, O.S.A., in his 18th century Conquista de las lslas Filipinos, gives a detailed account. Excerpts:

In a sitio called Bingsacan, near the town of Caysasay, around 1611, the natives saw several times, mainly at night, near a river where they go to fetch water a very great light coming from a small opening in a large rock...After this unusual phenomenon had been witnessed...some natives, both men and women, decided to see what it really was. They saw an image of Our Lady just a little taller than the size of one open hand from the tip of the thumb to the tip of the middle finger, dressed in white, with a crown on her head, and in her arms was the Infant Jesus, who also wore a crown. Divine Providence granted this vision to some devout native women.

Since so many claimed to have seen the apparitions of Our Lady of Caysasay, the church felt compelled to launch an official inquiry. Fr. Pedro Galende, O.S.A., in his book, "Angels in Stone: Augustinian Churches in the Philippines", citing the Augustinian Libro del Gobierno, writes that on February 24, 1620, the Augustinians issued an order to construct a church ''in the same place and site as Caysasay, visita of Taal, as it has been verified through serious investigation that the Most Holy Virgin has appeared there.”

The Holy Image has performed numerous miracles, not only for those who have gone to the rock to ask for help from the Queen of Angels but also for those who drank from the water and bathed in the nearby stream.

These miracles are confirmed in the accounts that Fr. Pedro de Arce, Bishop of Cebu, and Governor of the Archbishopric of Manila ordered to be drawn up and prepared by Fr. Juan Bautista de Montoya, Prior of Taal, together with Fr. Geronimo de Medrano and Fr. Juan de Rojas.

As a result, an arch was constructed over the spring near the church and named "Ang Balon ng Sta. Lucia'' (the Well of Sta. Lucia). To this day, the site of the well is known to the towns folk as "Banal na Pook'' (sacred site) and vestiges of the nearby spring called "Banal na Tubig" (Sacred water).

Another unique distinction in the long history of Our Lady of Caysasay is the link between her and the Chinese goddess, Ma-cho, protector of seafarers and overseas Chinese. History texts reveal that Chinese devotees were present at the Caysasay shrine even as early as the 17th and 18th century. Fr. Pedro Murillo Velarde, S.J. in his Historia de Filipinas (1749) states that Caysasay was "one of the most famous and frequently visited Shrines in these Islands, where Spaniards, natives and Chinese go to ask favors from the Blessed Virgin".

Through the years, the link has endured. Aldrico Dy, head of the Ma-cho temple in La Union, says that during their divination sessions, the goddess Ma-cho herself pointed to the Lady of Caysasay as "her original". "We are the same," he quotes Ma-cho as saying. Thus, the Chinese in La Union go on a pilgrimage to the Shrine in Caysasay bringing with them their goddess Ma-cho!

In 2003, the 400th year anniversary of Our Lady of Caysasay, a formal ceremony was held at the Shrine for Chinese devotees. There was a traditional Chinese ritual ceremony followed by a Catholic Mass and even the praying of the Rosary at the Basilica in Taal where everybody proceeded after the rites in Caysasay. "Instigating" this Chinese connection seems to be the Blessed Virgin herself judging by the fact that the most famous and best documented of her miracles was to a Chinese named Hay Bing or Juan Imbing (see story next page) in 1639.

She is Part of the Landscape and History

Many Filipinos, while aware of local Marian sites as in Manaoag and Antipolo, are not aware of Our Lady's manifestations in Labac, Taal. Taal, after all, is more known for its small volcano. Just recently, this scenic town was also listed in the World Heritage list since it is one of the most culturally-preserved sites of the Spanish colonial era.

Upon closer look, it is amazing how Our Lady has blended beautifully in the town's landscape and history. Known for the world's smallest volcano, the town of Taal also houses a small (is it the smallest?) miraculous image of Our Lady that has survived centuries. During the violent volcanic eruption in 1754, it was to the Shrine of Our Lady of Caysasay that the people of O1d Taal sought refuge. After that, it was around her that a new town, the present one, arose. Our Lady also has her imprint in the town's colorful history; the Caysasay phenomenon is in the historical records of the Augustinians who were assigned there, among others.

Mary in the Philippines

And yet, Our Lady of Caysasay is not only for the Batangueños.

The story of how she sprang from out of the waters way back 1603 is something for us all to cherish.

Just recently, more effort has been exerted to make known Our Lady of Caysasay. A foundation has been established to look after the Shrine. (Considering it is in the scenic town of Taal, it has got a lot of tourism potentiall) A musical "Mapaghimalang Birhen ng Caysasay'', penned by two foremost Filipino artists Ryan Cayabyab and Nestor Torre, was staged at the Cultural Center of the Philippines (CCP). Acting out Hay Bing alternately were Ogie Alcasid and Cocoy Laurel.

The Lourdes apparitions occurred much later, in1858 and now, this remote village in France is one of the most famous Marian shrines in the world. Should we regret that Caysasay, with all its documentation, has not become famous, even in the Philippines? Maybe not. The story of Mary in Caysasay is Mary in her best element: silent, hidden, and reaching out to people like Juan Maningcad and Hay Bing who are the last and the least in this world. It gives us a lot of comfort.

Click here to return from Our Lady of Caysasay to Marian Apparitions.