Padre Pio was born in 1887 in the small town village of Pietrelcina, Italy. At the age of five, the Sacred Heart of Jesus appeared to him in their parish church in Pietrelcina and later still as a child, his power of healing spread around when he was able to heal a young boy at the brink of death. Even as a boy, he already had visions of Jesus and Mary and experienced attacks of the devil. He joined the Capuchin friars at the age of sixteen and was ordained a priest seven years later.

Jesus pointed to a multitude of priests and said: “Butchers.” He asked Padre Pio to share in His agony and passion and to make reparation for sins, especially the lack of response of priests. He was given a visible stigmata, a sharing in Christ’s passion and suffering. Saint Pio suffered for 50 long years with this stigmata, his pierced hands nailed with the Cross of Jesus as he bore the wounds of Christ’s Passion.

The Holy Mass of Saint Pio was his life, his Calvary, his crucifixion, his paradise. His Mass lasted for three hours. The moment of Consecration was the climax of his passion; it was the crucifixion with Jesus. As he pronounced the words of the consecration, one noticed on his pale and exhausted face, the signs of indescribable internal suffering, the holy martyrdom of Jesus on the cross. One day, he said to Cleonice, his spiritual daughter: “During the celebration of the Mass, I am hanging on the cross together with Jesus, and I suffer all that Jesus suffered in Calvary, as much as is possible for a human nature.”

For forty years at the monastery of San Giovanni Rotondo, he was a much sought-after spiritual adviser, confessor and intercessor whose life was devoted to the Eucharist and prayers. Yet with such fame, he would often say: “I only want to be a poor friar who prays.”

His Devotion to Our Lady 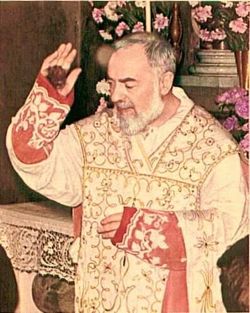 Thousands visited the holy friar when he was still alive to be cured of their bodily and spiritual ills. Even more visit his tomb today. It is said that after Our Lady’s Grotto in Lourdes, the tomb of Padre Pio in San Giovanni Rotondo is the second most frequently-visited pilgrimage site in the world. Padre Pio himself was a great devotee of Our Lady.

One day, it was the feast day of Our Lady in his own town at Pieltrelcina. Saint Pio was already old that time and could not leave San Giovanni Rotondo to travel to Pieltrelcina. He asked the young Capuchin friar taking care of him to leave him and instead go to Pietrelcina to attend the fiesta celebration there.

The young Capuchin friar said, “No, I will not go. I will stay here and take care of you.” But Padre Pio strongly admonished him, “Go to Our Lady in Pietrelcina; if you only knew how much the Blessed Mother means to me.”

A Great Love for the Eucharist

Padre Pio was, above all, a Man of the Eucharist. He would say, “My heart feels drawn by a higher force each morning I am united with Him in the Blessed Sacrament. I have such a hunger and thirst before I receive Him.”

Enraptured by the splendor of the consecrated Host, he would kneel in ecstasy before the Blessed Sacrament. He wrote in a letter to Padre Agostino in 1912: “I often ask myself if any people exist who do not feel their breast burning with divine fire, especially when they are close to Him in the Blessed Sacrament.” (Padre Pio, Letters 1,357).

He would spend countless hours before Jesus in the Holy Eucharist, from Whom came his powers of healing, bi-location, conversion and prophesy.

Padre Pio was known as a confessor and spiritual guide. Cardinals, bishops, priests, the royalty, state leaders, and the laity, would go to him from all parts of the world for confession and spiritual guidance.

The late Pope John Paul II himself said during the beatification of this great saint at San Giovanni Rotondo: “I myself was a recipient of Padre Pio’s vision and prophesy.” Padre Pio met the young Fr. Karol Wojtyla who came to him in San Giovanni Rotondo for confession. The future pope was then a newly-ordained priest studying in Rome. It was said that when a fellow Capuchin friar approached Padre Pio and told him there was a young priest from Poland, Fr. Karol Wojtyla, who wanted to see him, Padre Pio remarked: “How can I refuse the future Supreme Pontiff of the Church?”

Later, he told Fr. Karol Wojtyla: “We better pray hard together that you become a very good and holy HOLY FATHER of the Church.” And that was what became of Fr. Karol thirty years after his encounter with this saintly stigmatist.

A Man of Prayer, Hope and Faith

Saint Pio would challenge priests today to choose God above all and to live a life worthy of their calling and vocation as the ones chosen by Christ to live a life of holiness.

Pope Paul VI, during an audience with the Capuchins in 1971, said:

…The miracle that happened to Padre Pio will happen to you. Look at how famous he was; he gathered people from around the world to himself. But why? Because he was a philosopher? Because he was learned? No, because he said Mass humbly; he would hear confessions from morning to night, and he was… a representative of our Lord marked with the imprint of His wounds. He was a man of prayer and suffering.

Prayer was his daily food. What was prayer for this great saint? To him, prayer is an encounter with Christ and through Him, an encounter with the Heavenly Father, with God. In 1913, he wrote to Padre Benedetto, his spiritual director:

And in one of his letters:

In prayer, my soul seems to be completely lost in God… I am utterly in love with God and it seems to me that I must die… Times flies and there is never sufficient time for prayer… (Letters 1, 471)

Padre Pio, surrounded by his spiritual children, would advise them:

One seeks God in books, one finds Him in prayer. If today one no longer believes, a lack of prayer must be blamed. God is not found in books, but in prayer: the more we pray, the more our faith grows and we find God… You, children, do not neglect prayer; pray often during the day. Do a bit of meditation. You will find and see God.

The good friar would teach his spiritual children to pray, hope and not be worried of anything. “When one is seized by doubts, by distrust, by the anguish of suffering, then, more than ever, one must have recourse to the Lord in prayer, and find help and encouragement in it.”

He would exhort all to seek the peace and joy of prayer. “Prayer is the best weapon we have: it is the key which opens the heart of God.”

In the school of this great saint, we learn the way in which to pray, to hope and not to worry but instead to trust God at all times.

We pray to Saint Padre Pio today. He was the living image of Jesus Crucified. He is the modern Saint in our 20th century, a model of prayer, hope and faith, a servant-priest-victim like Christ Crucified. Let us allow him to continue to say to us: “PRAY, HOPE AND DO NOT WORRY!”