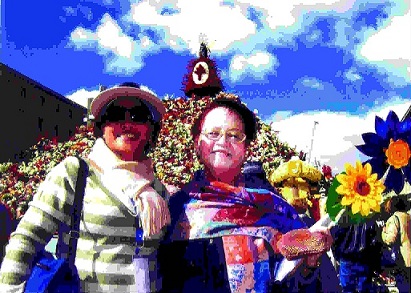 Last October 4, I gave a briefing to some 46 Cebuanos going on a pilgrimage from Fatima all the way to Rome for the canonization of Blessed Pedro Calungsod, a young Visayan catechist. I saw in the faces of people from different professions the eagerness to attend the special event in Rome and this made me look into my own heart and thoughts. Am I just as excited because I will be going to familiar places as their tour leader? Or am I also looking forward to sharing a momentous event in honor of the second Filipino saint whose loyalty became the golden thread of an authentic relationship with God?

As we boarded our flight, I wondered what the pilgrims were thinking about and what intentions they would bring to Blessed Pedro. We arrived safely in Madrid only to discover that the travel agency’s itinerary given to me was different from the one given to the tour bus driver. Mine included a panoramic tour of Madrid while in the driver’s copy the group will go straight to Avila and no longer go around Madrid. I clarified things with the driver but unfortunately he wanted to stick to his own itinerary. This confusion caused some tension in the group. All I could mutter was “Blessed Pedro Calungsod, help us….”

I took the pilgrims for lunch to Siglo Dolce, a restaurant in Plaza de la Catedral in Avila. Then I gave them time to visit the cathedral. This helped eased the tension but still there were some who demanded their money’s worth. This is where my “cross” began. And then I recalled Revelations 3:21, “To those who win the victory I will give the right to sit beside me on my throne, just as I have been victorious and now sit by my Father on his throne.” I thanked God for comforting me with His words. Truly, what you read in the newspapers about the happy pilgrimages sometimes do not reveal the hidden trials. But then, unlike an ordinary pleasure tour, shouldn’t a pilgrim expect to meet Christ with His Cross along the way?

On our way to Santarem, Portugal, a policeman stopped our bus to randomly check the tacometer. He saw that none of us used our seatbelts and said each of us would be fined €100. After much pleading, the policeman relented and no longer collected the fine since it was a first time violation. We arrived at our hotel but sadly learned our group would not be able to join the evening Rosary since the esplanade or Fatima square was 13 kilometers away. Instead, I told them about the St. Stephen Eucharistic Church where we could celebrate Mass. On October 13, the feast day of Our Lady of Fatima, we joined throngs of pilgrims honoring the Blessed Mother at the esplanade. I had asked our group to stay in the bus while I looked for our guide. Unfortunately, three couples went down on their own to search for the restrooms. The other members of the group joined the crowd at the square while I went in search of the three couples who were separated from us. By God’s grace, I found them and brought them back to the hotel where we waited for the rest of the group. I thanked the Holy Spirit for leading me to these three couples. On our last day at Santarem, the Lord granted our prayers. We heard Mass at the Eucharistic Miracle Church where the priests in our group concelebrated with French priests.

Then we traveled to Salamanca, a beautiful university town. I asked Luis, the driver, to take us around so that the pilgrims could see the amazing way the bricks of the buildings turn pinkish under the rays of the sun. The following day, we went to Zaragoza, visited the church and experienced the feast day of Our Lady of the Pilar, whose image was seated on top of fresh flowers. What a sight to behold!

Our next stop was Lourdes. Mass for us was arranged at downtown Lourdes. I found it unusual since most tour groups attend Mass at the grotto, in the small chapel at Rosary Basilicque. The next day, we went to the St. Gabriel chapel where we celebrated Mass in the Visayan dialect. Songs were sung and the voices of our priests blended beautifully.The following evening we joined the Rosary procession, bringing with us candles that were given free by a shopkeeper whom Fr.Renato Gamorot, one of the priests in our group, had befriended.

Early morning the next day, we boarded train no. 8523 to Paris. I made sure all pilgrims were properly seated. Then I made my way to my seat hoping to get some sleep. However, I was blessed by God with good company, Fr. Augustinus, an Indonesian priest. I fell asleep during our conversation but he kept the conversation going until we reached our destination! In Paris, our tour ended at Rue de Bac where we visited Our Lady of the Miraculous Medal. Praise God – He enabled our priests to celebrate Mass for our group there!

Sadly, we missed our early morning flight to Rome the next day but we were able to take an afternoon flight. And this was followed by more “crosses” – members of our group demanding reimbursement for a missed lunch, no chapel to celebrate Mass, and most of all, unavailability of tickets for the canonization. But thank God for angels! Someone delivered our tickets to the hotel and I distributed these to our group over dinner.

On the day of Blessed Pedro Calungsod’s canonization, our group was blessed to be among the thousands of Filipinos in attendance. I wondered at this young Pedro Calungsod who gathered us Filipinos together on this momentous day. Is it not also like this when we gather for the Eucharist? Later, church and government dignitaries and pilgrims got together at a reception held at Ambassador Mercy Tuason’s home in thanksgiving for San Pedro Calungsod whose humility and loyalty to the faith has become a shining beacon to all Filipinos. Truly, our hearts swelled with pride and joy.

Depite the “crosses” I carried during this pilgrimage, all was forgiven in the end. This thought strengthens me: God gives me crosses in this life so that I may wear a crown in the next.