Still, just as Jesus became the God-Man in order to reveal His immense love for us, so also the Third Divine Person, God-Love, willed to show His mediation with the Father and the Son in some external image. That this image is the Immaculate Heart of the Virgin is clear from the words of the saints, especially those who hold Mary is the Spouse of the Holy Spirit. Whence Blessed (now saint) Louis Grignion de Montfort draws the conclusion according to the mind of the Fathers:

The Holy Spirit lacks fruitfulness in God, that is, no divine Person proceeds from Him. But He becomes fruitful through Mary whom He has taken to Himself as Spouse. With her and in her and through her He produces His most illustrious work, the Incarnation of the Word… 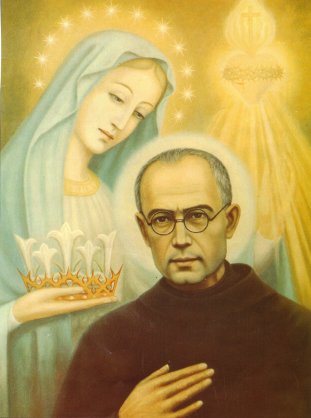 …Even after the death of Christ, the Holy Spirit accomplishes everything in us through Mary. For the words of the Creator pronounced to the serpent concerning the Immaculata “She shall crush your head” (Gn 3:15) are, according to the teaching of the theologians, to be understood without limitation in regard to time.

We hear from many people today that the prefix "co" signifies on the equal level, as in co-manager. However, it is not in the same case with Our Blessed Mother and Our Saviour, because although they worked together for our redemption, the dignity and person of the one is different from the other. Mary was a mere creature and so lower in dignity than her Son Jesus who is God. She is a human person while our Redeemer is a divine person.

The title of Coredemptrix applied to Mary never places her on a level of equality of with Jesus Christ, the divine Lord of all, in the saving process of humanity’s redemption. Rather, it denotes Mary’s regular and unique sharing (although subordinate and dependent) with her Son in the saving work of redemption for the human family.

The Mother of Jesus participates in the redemptive work of her Son, who alone could reconcile humanity with the Father in His glorious divinity and humanity. Because of her intimate and unparalleled sharing in the mysterious work with the divine Redeemer, both at the Incarnation (cf Lk 1:28) and at the work of redemption at Calvary (cf Jn19:26), Mary has merited the Church title, "Co-redemptrix" which literally means, "with the Redeemer."